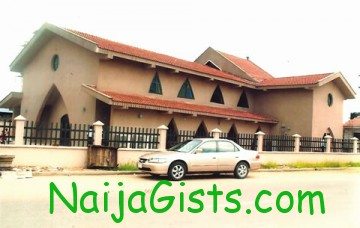 The donation was made following the President’s complaint that the old church building in the village was unbefitting of a president’s village. The acceptance of the donation, they say, is wrong and unconstitutional.

According to Punch News, this was the admission made by Femi Falana, a human rights activist and Lagos-based lawyer yesterday.

A civil rights group, Socio-Economic Rights and Accountability Project has already taken their grievance to the Economic and Financial Crimes Commission (EFCC) asking them to probe the donation of the church building. Jonathan’s acceptance of the donation, they said, is against the Nigerian constitution.

“Already, one of the rights groups questioning the propriety of the gift, the Socio-Economic Rights and Accountability Project, has asked the Economic and Financial Crimes Commission to probe the donation of the church building that has capacity to seat 2,500 at a time to Jonathan’s Otueke community.

The Executive Director of SERAP, Mr. Adetokunbo Mumuni, in a petition to the Chairman of EFCC, Mr. Ibrahim Larmode, in Abuja on Monday said the President confirmed during the dedication of the church building that it was donated to him by the Italian construction firm.

The section provides that, “A public officer shall not ask for or accept any property or benefits of any kind for himself or any other person on account of anything done or omitted to be done by him in the discharge of his duties.

“For the purposes of subsection (1) of this subsection, the receipt by a public officer of any gifts or benefits from commercial firms, business enterprises or persons who have contracts with the Government shall be presumed to have been received in contravention…unless the contrary is proved.”

Meanwhile, some opposition parties are already calling for Jonathan’s resignation.

“The CPC’s National Publicity Secretary, Mr. Rotimi Fashakin, said that it was an unfortunate thing that it was “the chief of state that is whittling down the fight against institutional corruption. The opposition party stated, “Leadership comes with a price. The leaders must not just be above board, but must be seen to be above board. The acceptance of a gift of that magnitude is definitely a faux paux (whether a church or not is immaterial). In a saner clime, heads of government have been known to resign their appointments over matters as this.”

The fact that the donation was made by a foreign company compounds the issue as many are in doubt of the motive behind the donation. As Femi Falana said, “the contractor has some contracts which it has failed to execute and now went to build a church for the President” only makes it more fishy.

The act has been called different names – foreign bribery, breach of national anti-corruption legislation, unsolicited gifts and more. However, what should be more intruiging is the outcome of this case. Would it be forfeited to the government under different sections of the Code of Conduct Tribunal Act and Bureau as Falana suggested?

What do you think? Was the President right to have accepted the donation, church or no church? Is this a case that calls for a probe by the EFCC? Does this call for the impeachment or resignation of the President? (punch news)