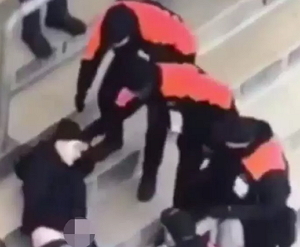 According to The Scottish Sun, the  young man in his 20s was caught on camera relieving his frustration before Hertha Berlin 1-0 loss to Schalke. He was later ejected from the Schalke’s Veltins-Arena  after struggling with a group of 4 policemen.

He has been charged with indecency and assault.