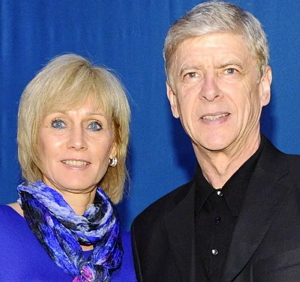 Former Liverpool Bill Shankly, who coached the club from 1959–1974 was so much in love with the club that it was described as some form of obsession. But his became a minor case after Arsene Wenger’s love for Arsenal took a new dimension

The about to exit Arsenal boss would watch footage of matches from around the world after he got back from the training ground, and attended Arsenal games at all levels, from academy up.

His all-consuming fixation with football earned him the nickname ‘Professor’ with the club’s fans, but seems to have cost him his marriage to his long-time love.

Wenger split from his wife Annie Brosterhous in 2015 following a five-year marriage. The couple have a 20-year-old daughter together.

‘Ten years ago I said to my wife, “Five more years and that’s all”, and I am still here.

‘It is difficult to find time to see them but there are jobs [which are worse]. You have guys who leave for work on Monday and come back on Friday.

‘In my job I travel, but the problem is not so much the quantity of time you spend with your family, it is the quality.

‘That is where this job is more damaging. You do not always give them the quality they deserve when you are at home because you are thinking of the next game.’

He said at the time: ‘My wife likes watching football, she watches all the games of Arsenal at home. She is not a fanatic but she likes watching sports. No, she does not have much choice.’

But in 2015 it emerged the couple had asked a judge in Paris to approve the first stages of their separation.

Wenger’s obsession with football raises questions of what he will do now his 22-year reign at Arsenal has come to an end.

The only time Wenger has not been at the Arsenal training ground from dawn until late has been when his Arsenal players were away on international duty, and even then he worked as a pundit on French TV.

As well as a property in the exclusive village of Totteridge, north of London, he also has a family home in the beautiful Alsace village of Duttlenheim, where his parents once used for business.