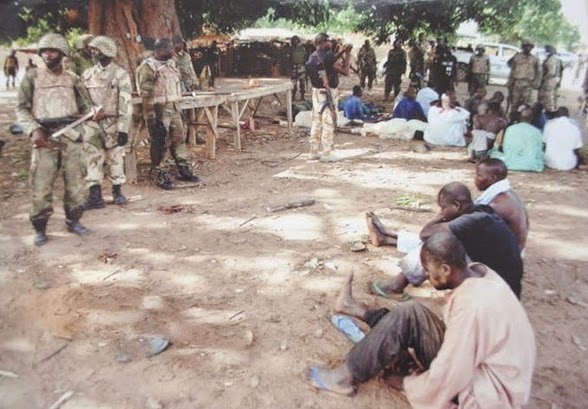 Full gists of how Abubakar Shekau, the impostor and leader of the Boko Haram terrorist group lost his left in a shootout with Nigerian troops in Konduga on Wednesday Sept. 17 emerged with military sources disclosing that he met his Waterloo in an ambush reminiscent of the type the sect had been using to hack down Nigerian troops.

It was gathered that when the first attack on Konduga whereby hundreds of insurgents were taken unawares and killed after over seven hours of fighting and several of their colleagues, arms and ammunition captured, the military commanders strategically urged his captured members to send a message to Shekau that they (insurgents) have routed the troops.

Before the captured insurgents were urged to make the contact and deliver the message, the military commanders had promised them that their cooperation would play a role in the level of punishment to be meted to them after the battle hence they felt reassured.

Also, the captured insurgents had disclosed that Shekau usually moved in a convoy of cars painted in military colours while he sits in a MOWAG Armoured tank with Boko Haram inscription on its front.

When Shekau was contacted, his captured men spoke to him in Arabic, assuring him that they had taken over Konduga, thereby giving him the all clear to proceed from Sambisa Forest. To convince him further, a set of his men captured were told to sing the victory song in Kanuri language they normally sing at the background.

Having convinced himself that the messenger was his chief courier in such situation and the message is authentic, he and his followers made for Konduga, heavily armed with Anti-Aircraft weapons, General Purpose Machine Guns, several AK 47 rifles and other IEDS’.

However, on entering Konduga town, he and his followers were encircled by strategically placed and heavily armed Nigerian soldiers. Immediately he contacted the messenger and discovered that something was amiss, he ordered his followers to start shooting in all direction.

This spurred the Army Commanders to give the directive to open fire. When he discovered that the fire power of the Nigerian Army who used both Infantry and Artillery weaponry was overpowering that of his men, he jumped out of the MOWAG and made to escape.

But eagle-eyed Nigerian Soldiers spotted him and opened fire in him, shattering his legs in the process. It was learnt that he also received bullet wounds in other parts of his body leading to his bleeding to death.

Recall that Military sources had earlier disclosed that Nigerian troops scored a strategic victory in the current battle against terrorists operating in the North East on September 17.

The sources noted that during a desperate attempt to capture Konduga in their delusion to eventually marching on and capturing Maiduguri, the man who had been mimicking Late Abubakar Shekau in recent videos was feared to have been finally killed.

The sources said, “It is getting more certain that the terrorists’ Commander who has been mimicking Shekau in those videos is the one killed in Konduga on September 17, 2014.”

Affirming the development, PRNigeria sources said the suspected demise of the Boko Haram leader is responsible for the scattering of the sect members in different independent locations in the neighbouring countries, especially in Cameroon noticed in recent days.

The security sources noted further that “the process of confirming that the dead body we have is the same as that character who has been posing as Shekau is ongoing” adding “He is definitely a prominent terrorist commander. I don’t want to say anything about this yet please.”

Another high ranking military source insisted that the resemblance is too striking to be a coincidence.

“They cited his facial marks, beards and teeth apart from the recovery by the Nigerian troops of some of the Armoured Vehicles and Hilux jeeps that had featured in previous videos of the prime suspect.

“The officers assured that the Defence Headquarters will soon address the nation after full investigation of their latest discovery”.