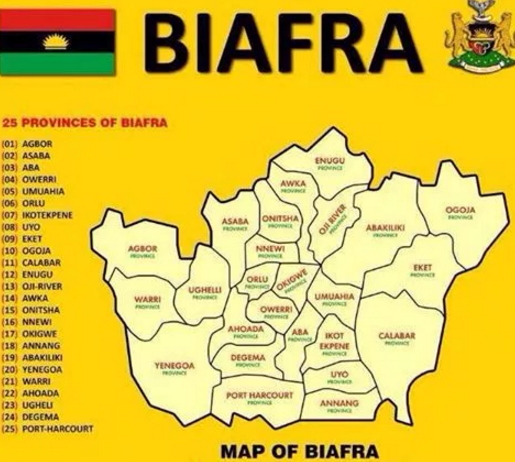 June 25, 2017 – The Ibibio People Of Akwa Ibom State Rejects Inclusion In Biafra, Announces Commitment To The Sanctity Of Nigeria

The Ibibio of Akwa Ibom State say they remain committed to “the sanctity of Nigeria as one and indivisible” irrespective of the challenges currently facing the country.

The Ibibio People’s Union (IPU) in a statement by Ikpafak Edet Udofia, Global President and Ikpafak Aniekan Udoh, Global Secretary, reacting to their purported inclusion in the proposed Biafra, said yesterday that they “still are well versed with self-governance and do not need others to think or speak” for them.

The union, in a statement, said they are “well aware of a key reason why the first Biafra project failed and will not agree to be taken for a ride again.

We posit that irrational exuberance led to the declaration of the first Biafra BEFORE ALL the ethnic groups in Eastern Nigeria were properly consulted for their input. The same mistake is being repeated demonstrating that no lessons were learned from the first fiasco.”

It said having have looked around the world it came to the realization of “the need for at least one strong country for black people. Since there is strength in size, the Union believes in a united well-governed Nigeria. Nigeria has the people and resources it only needs good and responsible leaders and the will to be that country. Therefore, we encourage all Nigerians to join hands to work to improve the country.”

The union therefore “categorically and very strongly repudiates the effrontery of those who would draw a map of their dream Biafra and include Ibibio land without prior consultation.”

It said while the Ibibio are not against any ethnic nationality within Nigeria deciding its destiny, they are not and will “never be part of Biafra.”

It sympathized with the plight of the Igbo living in the north, and condemned any act of intimidation, violence against any ethnic group, it declared that the Ibibio are part of Akwa Ibom and Nigeria, and that ” should Nigeria disintegrate, Ibibio people, are capable of forming their own country by themselves. There are many countries in the world today whose population is less than the current population of Ibibio.”