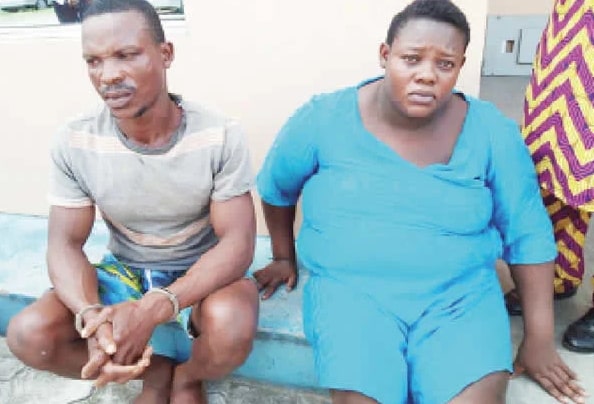 Police in Akwa Ibom state on Wednesday paraded a man identified as Essien Okon for allegedly killing his son.

Essien and his wife, Peace, allegedly prepared a poisonous concoction with a certain seed called asene and forced the boy to drink it.

It was learnt that they took the victim to a swamp where he was buried.

The father, who confessed to the crime, said Joseph was a wizard, who killed his former wife.

Our correspondent learnt that Essien married Peace after the death of his former wife, Joseph’s mother.

He added that many of the misfortunes he had been having was caused by the boy.

The state Commissioner of Police, Zaki Ahmed, in his maiden interaction with journalists, said the suspects would be arraigned at the end of investigation.

“On March 25, 2019, operatives of Oron division arrested one Essien Okon and Peace Okon of Edoho Emma Street, Oron Local Government Area, who conspired and lured their son, Joseph Okon, now deceased, whom they accused of witchcraft, into an engine boat on the pretext of going to cut bamboo sticks in a swamp to be used for construction of a kitchen.

“While at the swamp, the suspects removed a concoction, prepared with poisonous seed called asene and water; they used enema and pumped the concoction into the deceased’s stomach, leading to his instant death. The suspects secretly dug a shallow grave in the swamp and buried the deceased there,” he said