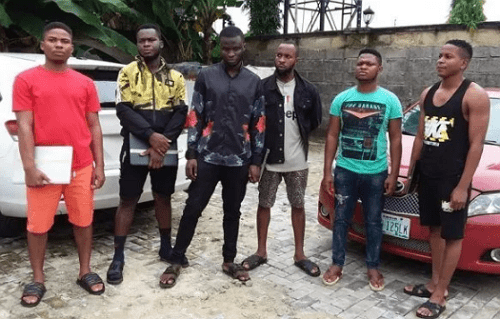 End came for the activities of 6 suspected internet fraudsters, better known as “Yahoo Boys” on Wednesday as operatives of the Economic and Financial Crimes Commission, EFCC, Uyo Zonal Office in an early morning raid, stormed their apartment on No. 28b Church Road, Uyo, and arrested.

Ugochukwu Ndukwu (a 25-years-old DJ); Stanley Ibeh, 27 (who claimed to be an interior decorator); Godwin Akpan and John Larry, aged 26 and 24 respectively, who both said they are students; Godwin Ini Obot, 27 who claimed to be a cinematographer and 24-year-old Victor Ejiogu, who said he was a serving member of National Youth Service Corps, (NYSC).

Even though the suspects claimed to be involved in different legitimate lines of businesses and academic pursuits, forensic analysis of their laptops revealed scam mails and documents that established their involvements in internet fraud.

Upon their arrest, Victor Ejiogu, the 24-year-old NYSC member tried to conceal and destroy what would be incriminating evidences against them by throwing their laptops all the way down from the third floor of the three storey building where they live.

However, the Commission’s forensic experts were able to power the laptops and retrieve the scam mails and fraudulent documents, the suspect wanted to destroy.

They are all currently making useful statements to the Commission and will be charged to court as soon as investigations are concluded.