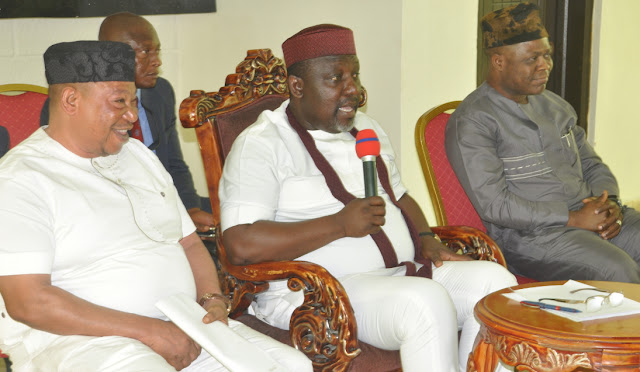 Imo State: Where there is no Legislature

In modern democratic societies, the legislature performs three conventional functions of representation, law-making and oversight responsibilities. The 1999 Constitution of the Federal Republic of Nigeria (as amended) has provided the legislature in different sections, the powers to perform these functions at both the central and state levels.

The legislature controls through legislation, all economic, social and political activities of the state or country. It also scrutinizes the policies of the Executive and provides the framework of the judiciary to operate.

Contrary to the above norm, in Imo State, there are three arms of Government – the Executive, the Executive and the Executive. The executive has one name – Rochas Anayochukwu Ethelbert Okorocha, who rules the State (with his family) as a conquered people. The State Assembly is mere O yes rubber stamp. In Imo, it is the state versus her citizens, instead of the state for the citizens. I challenge whoever that thinks otherwise to prove me wrong, with verifiable facts and superior argument(s).

Anyone dreaming that recent developments at the State House of Assembly suggest they have woken up from slumber should wake up from that sleep and take some malaria pills. It is a huge joke and there is nothing like Imo State House of Assembly; instead, we have Okorocha House of clowns, in practical terms. What we have occupying the exulted positions of state lawmakers is a bunch of timid opportunists and puppets, who believe that their ascension to the state legislature is a special favour from the cad governor of the state, hence, they owe him worship.

How else do you describe a state Assembly that cannot boast of any meaningful people-oriented legislation since its inauguration? How else can one explain the fact that the only time people hear about Imo State House of Assembly is when there is a Budget or Supplementary Budget to ‘adopt;’ not pass, as this Assembly has never scrutinized any budget proposal submitted to it. The budgetary process is done in utmost secrecy and is mere ratification of the governor’s submission. Sometimes, the budget is signed and spending commences before the so-called annual budget proposal is submitted to the Assembly. Majority of the members of the State Assembly do not know what goes on in the legislature. Most legislative decisions are taken in the Executive Chambers. Another time you hear of the Assembly is when there is a request for loan for the personal use of the ‘Emperor’ or when there is an obnoxious anti people bill, usually sponsored by the Executive, through one of the puppets? A typical instance is that of the anti-media bill, smuggled in through the Deputy Speaker, Ugonna Ozurigbo.

They are at the beck and call of the Governor and have never and will never investigate whatever the executive is doing. No questions are ever asked; by the way, who, in the State Assembly has the guts to contemplate questioning the Governor or any of his allies?

It is an indubitable fact that the Speaker of the State Assembly, Acho Ihim takes instructions from the executive and can do anything to please the Governor. Some other members of the State Assembly kneel before him and practically tremble at the mention of his (Okorocha’s) name. I refuse to include that ridiculous title of Honourable, because, they are about the most dis-honourable people I have ever seen in public offices.

I simply smiled when a Civil Society colleague in Owerri attempted preaching Open Budgeting to Imo Government. Without apologies to a few of the lawmakers that relate with me, I can bet with my life that majority of them do not even have copies of the annual budget of the state they claim to be passing. Has the Assembly ever interrogated any budget proposal by the Executive? The Imo State Annual Budget is a secret document that only the governor and his cronies have access to. How then can the citizens be involved in the business of governance? How can they track government spending and budget performance?

How many bills that can promote good governance, enhance accountability, improve the socio-economic well-being of the citizens and secure the livelihood and future of Imo people have the present State Assembly passed? If it is not abortion bill today, it is anti-media bill tomorrow; from one obnoxious move to another. How did we get to this point in Imo?

Not even the public outcry that followed the numerous atrocities of the Okorocha-led government has moved them to act. Not even the blood of Soromtochukwu spilled during the illegal demolition of Ekeukwu Owerri. They are so dumb that they could not even pretend to be investigating any of the allegations against this ultra-corrupt government in the state.

From the complete absence of due process and rule of law, to the waste of scarce resources on trivialities; from non-payment of workers’ salaries, gratuities and pension of retirees, to issuance of dud cheques to pensioners; from failure to account for Bailout funds, Paris refunds and even the over one trillion Naira that has entered the state in the last seventy months to the use of state resources in conducting personal businesses.

What about the flagrant disobedience to Court orders and illegal demolition of private and public buildings? Land grabbing is a major characteristic of the present administration. How can a government seize landed property, using governmental powers and convert them to private use?

Nearly seven years into the present administration in the state, no local government election has been held. Where are the hundreds of billions accruing to the twenty-seven local government areas of the state? Is it the billions said to have been spent on statues? Now, Imo has Ministry of Happiness, with the Governor’s younger sister as Commissioner. Indeed, Imo has been rescued.

What about the Imo State Oil Producing Areas Development Commission- ISOPADEC, which funds should be statutory? At some point, Okorocha claimed to be saving the ISOPADEC billions for the construction of a Maritime University in Osemotor in Oguta Local Government Area of the State. Where is the Maritime University, nearly seven years after and where is the money?

The present administration in Imo is synonymous with corruption and is obviously irredeemable. But, where are the other two arms of government? The State Judiciary has become a toothless bulldog and cannot bite. Judicial pronouncements are disregarded with impunity and till date, nobody is in Prison for contempt.

Members of the Legislature that should have been the hope of the people to check the excesses of this ultra-corrupt government in Imo go cap in hand begging for contracts and favour from the executive. At some point, the governor engaged them with executive functions in Local Government areas.

Of all the atrocities of the present administration, the public outcry, media reports and petitions from citizens, which one has the present state Assembly investigated? Which member of the governor’s cabinet has either been summoned or questioned by the Legislature? Which decision of the Governor, no matter how ridiculous and unpopular, has the present Assembly questioned?

Recent developments in the State Assembly may have been fueled by the fact that the governor is sitting on their constituency allowance and may have reneged on earlier promises. Following the initial protest of Budget boycott, funds are said to have been released to the leadership of the house and their cronies, who are mere messengers of the executive to rise against their colleagues; yes, divide and rule. Some of the resignation letters flying around may have been written and assented, prior to their emergence as principal officers. No one should be deceived. These guys cannot be trusted.

Ultimately, the surest way forward is for Imo citizens to take their destiny in their hands. Little wonder the mood of the last meeting of Nigerian Human Rights community in Owerri was for a declaration of a State of emergency in the State.

The only way for the State Assembly to redeem its image is to initiate immediate impeachment proceedings against the governor. For the lawmakers already marked for suspension, the die is cast. Can they, for once, get emboldened and stand on the side of the people?

The sorry state of Imo State today should be a lesson for all. 2019 is around the corner. Ndi Imo should not only be interested in who emerges the governor of the state, but those that are going to the State Assembly.

In addition to the business of lawmaking, one of the functions of the Legislature in every democracy is to serve as a check on the activities of the executive. In todays Imo, where are the laws made by the present administration and what checks have they provided? What oversight functions have they performed? Whom do they represent, other than their pockets and pay master? They are playing along so they can return to the Assembly in 2019; what a shame. Governor Okorocha runs Imo like an extension of his private business empire and members of the legislature sit as spectators?

There is no gainsaying the fact that indeed, there is no ‘capacity’ in the State Assembly and its leadership deserves no place in history.

Building a vibrant legislature is one sure way of deepening democracy, checking tyranny, promoting good governance, ensuring checks and balances and indeed, safeguarding the future of the people. From 2019, Ndi Imo must ensure that these ‘traders’ do not return to the state Assembly for any reason and through any means. Write down all their names and blacklist them, as they are undeserving of any position of responsibility.

The step being taken by Imo People’s Action for Democracy to ‘Occupy’ the State during the Christmas celebration is commendable and should have the sign in of all well-meaning Imolites. All stakeholders must join hands in sending a strong warning to this Nebuchadnezzar in Imo. The surest way forward is for the citizens of the state to take their destiny in their hands.

As for the present Imo State House of Assembly, the members should bury their faces shame.

The time to reclaim the people’s state is now. Do not be left out!

[About The Author: Dr. Walter Duru is a Communication expert and Executive Director, Media Initiative against Injustice, Violence and Corruption-MIIVOC. Reach him on: walterchike@gmail.com]