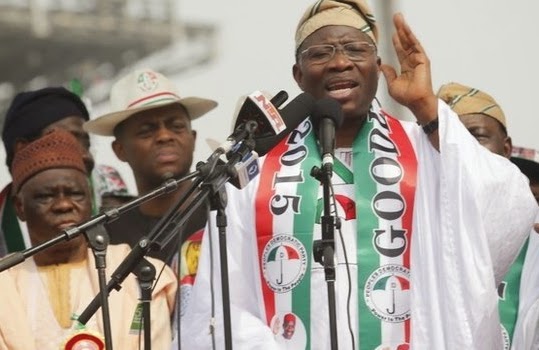 Nigeria’s President Goodluck Jonathan while speaking to the BBC last week made some very stunning pronouncements. Mr. Jonathan in answer to a question, “where are the terrorists?”, did not answer as perhaps we might wish, but said, “they were being resigned/deactivated.” Jonathan said:

“They have a lot of linkages; the whole West Africa, central Africa going to North Africa is a free world for them. Whenever the pressure is on them they escape… Some of them even sneak back to reintegrate into the civilian population.”

This is alarming. This means Boko Haram is not being terminated but put on pause. This means Boko Haram terrorists are not facing justice but are escaping under full knowledge of the Nigerian army. These are terrorists with bloodied hands and rape in their record. This means Nigeria is not being saved from terror, but there is only a palliative remedy being arranged by Nigeria and the dollar- contracted Chadians and Nigerien forces. This means the entire Africa, north, west and central is being put to unnecessary risk and exposed to trained and murderous terrorists from Nigeria. This means at anytime these terrorists can again be recruited and sponsored by new or their old sponsors who Jonathan has yet to reveal.

Importantly, while knowing that Boko Haram terrorists are as the president said, “reintegrating into society,” the people were not advised of this and warned to be on the lookout and find and report suspicious people; on the contrary the Nigerian army and air force as we reported earlier at the start for the 6-week war, have been suspiciously and mischievously dropping flyers for Boko Haram claiming the sect members are repentant. A move that we analyzed is to promote the deadly sucessful reintegration of these terrorists into society to aid the Jonathan desired speedy electioneering 6 week war.

While Nigeria stalled/disabled the chartered coalition from advancing against Boko Haram – likely for political credit reasons — the Nigerian army has been described as “afraid” to collect captured territories and is leaving these for the terrorists’ return to cause unlimited havoc.

One of our members and sources said,

“We haven’t heard of the Cameroonians crossing into Nigeria to fight Boko Haram (BH). And we know the Nigerian army (NA) stopped in Bama towards the Cameroonian border. Nigeria did not stop in Bama. When BH was chased out of Bama the NA said it’s left for the Chadians to deal with them. That’s to say Gulumba, Dar jamal, Kumshe, Wulgo, Kala Balge and a lot of other towns are no longer Nigeria.

“One cannot still travel the road from Maiduguri to Damboa due to some villages still controlled by BH along that road. And from Biu to Damboa is still blocked. BH has been going in and out of Gamboru having a field day because there’s no presence of the NA.

“We were made to believe the Chadians had to come in to chase them out some days back. I don’t know which but they (BH) still has one LGA in its grasp in Northern Borno. From the day Bama was recaptured till date, civilians are being evacuated from the town into IDP camps in Maiduguri.”

Ahmad Salkida, a Nigerian in the know about Boko Haram also commented on Facebook that the Nigerian army is lying and that eight (8) local governments are still in Boko Haram partial or full control.

We hereby alert Nigerians and the winner of the next election to pay attention to the fact as confirmed by Mr. Jonathan, that thousands of terrorists have been maliciously allowed by the Jonathan-led coalition to seep into local communities and to dissolve into neighboring countries. These terrorists may at any point be recruited and unleashed again to continue the pogrom in Nigeria, precisely the nation’s north. Boko Haram is not in any form over. We must remember how the failure of Jonathan to commit to Yar’Adua’s de-terrorization measures allowed Boko Haram II to form and operate in 100-fold as deadly fashion as Boko Haram I did.

We are in more danger today.