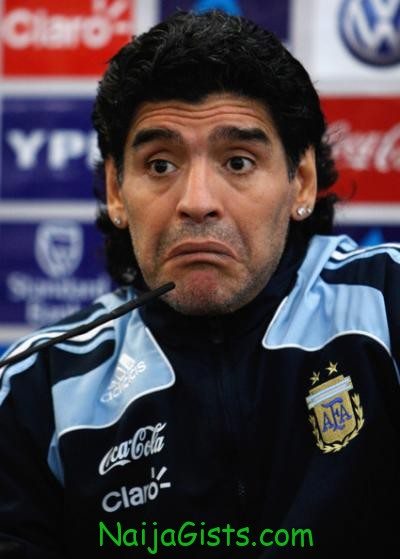 The controversial Argentine coach, Diego Maradona,  has been fined and suspended from the next three United Arab Emirates Pro League matches, following an altercation with Al Ain manager, Cosim Olaroiu.(naijagists.com)

Both coaches have been at loggerheads since November’s Emirates Cup clash, where Maradona claimed Olaroiu aggravated him with his unacceptable goal celebrations.

The intense relationship reached a climax when Maradona’s side, Al Wasl, fell 2-0 to Al Ain on Friday. The Argentine was involved in a heated argument with Olaroiu, prompting the UAE Football governing body to slam the latter with a 2,700 Euro fine for the incident.

Maradona has also bemoaned the standard of officiating in UAE’s Pro League throughout the 2011-2012 season, claiming last week that there was an “agenda” against his side(daily times).

Continue Reading
You may also like...
Related Topics:diego, Maradona, suspended