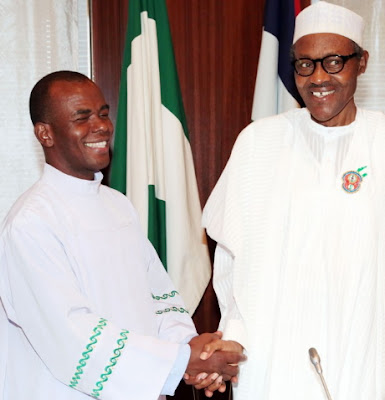 Excerpts from a letter written to Enugu-based Catholic priest Ejike Mbaka by the Movement for the Actualisation of Sovereign State of Biafra.

“Nigeria politics is beyond your understanding.”
“God forbid that we will be among the party that will be clapping for you while you are going wrong. He should stay clear of the Nigerian politics before it drags his spirituality to the dust.

We are not saying he should not give prophecy of what God has revealed to him concerning Nigeria and as an anointed man of God, but his today’s (Sunday) Adoration preaching are far away from what is happening in the country, as if the anointing is not with him again.

“People now see him as a Priest who is always going to Aso Villa for selfish interest. He can never serve two masters at a time, if he wants to be a politician, he should forget about priesthood.”

MASSOB also accused President Buhari and other Northern leaders of celebrating Mbaka’s 21 years of priesthood because he was dancing to their music, stressing that the priest could not have been wiser than all the Catholic Bishops put together.

The group advised Mbaka to join those it described as freedom fighters clergies who it said are agitating for the liberation of millions of Biafrans from Nigeria’s enslavement, if he wants to win souls for God and not to soil his white rob in the murky waters of Nigerian politics.