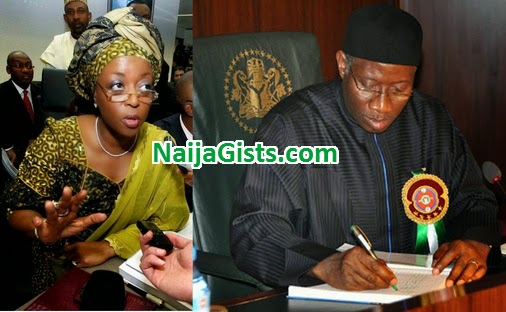 This is even as he described as mischievous, comments that he was mediating to save the skin of some ministers that are envisaging prosecution due to their roles in the outgoing government.

Abubakar was first to arrive in the Villa in a light green Jaguar car, while the minister followed shortly in a black four-wheeled drive.

He did not stay up to 20 minutes before he came out, leaving the petroleum minister behind.

When asked the purpose of his visit, Abubakar ‎said: “As the chairman of the peace committee, there is always interaction between the incoming government and President Jonathan, in order to ensure that the peace we have been able to get, is sustained. So, naturally I am here to give him a report of what the committee has been doing.”

On whether he was in the Villa to intervene on behalf of the petroleum minister, the former head of state replied: “‎I think people are just trying to be mischievous, I have been meeting with a lot of people and a lot of ministers in the course of this transition. So, there is nothing strange in me meeting with anybody.

“I wonder if you go through your records to see the number of meetings I have been engaging in. I don’t know why the last one will be a subject of media chat. This is not the first time I have been meeting her and a number of ministers, so I don’t see what the whole hullaballoo is all about. People are just being mischievous,” he said.