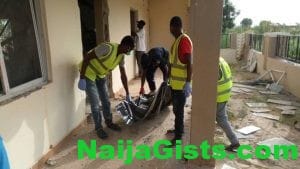 A man among the victims of monkey pox viral disease being treated at an isolation center in Okolobiri area of Bayelsa state has ended his own life.

The male victim whose identity is yet to disclosed to the media hung himself in the wee hours of today Monday the 16th of October 2017 in Niger Delta University Teaching Hospital .

He said the deceased was among the 21 suspected cases of monkey pox virus being treated in an isolation center in the aforementioned university.