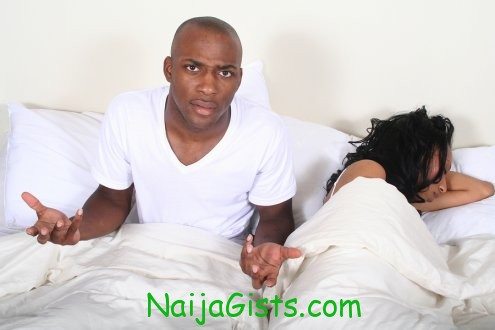 Daniel Olufumilayo, a 39-year old man, has accused his wife of plotting to kill him with sex in order to inherit his property. naijagists.com

He said his wife usually demanded as many as eight rounds of sex before the break of dawn.

The divorce-seeking father of two stated this in a divorce suit he filed against his wife at an Agege Customary Court, Lagos, Southwest Nigeria.

He told the court that his wife is so crazy about sex to the extent that she always demanded for seven or eight rounds of it every night.

He added that in his entire life, he has never met a woman like his wife when it comes to hunger for sex.

“My wife can never be satisfied sexually. Her plan was to kill me with her excessive demand for sex so that she can inherit my property,” he said.

The cobbler claimed that when he could not satisfy her sexually, he had to send her packing so that she can marry another man of her choice.

He also alleged that his wife made his children hawk sachet water and sweets for her on busy roads.

Responding to the allegations levelled against her by her husband as regards her outrageous demand for sex, Zainab said: “Afterall, he could not accuse me of infidelity. I am not a flirt. If he accused me of being a nymphomaniac, it is his headache.

“Sex in marriage is my conjugal right which I think every responsible man must preserve and protect and if I demanded for as much as I want, I have not done anything wrong.”

The petty trader said that she did not know what came over her husband, when he suddenly asked her to pack out of their matrimonial home after the naming ceremony of their last child.

According to her, “Olufumilayo ordered me to vacate our matrimonial home after I gave birth to our last child even though I did not offend him in any way.”

Zainab told the court further that she had to re-marry when, after waiting for two years, hoping that her husband would have a change of mind following efforts by her parents to resolve the matter amicably and reconcile them, failed.

The court, after listening to both parties, dissolved the union, adding that the marital relationship between the estranged couple had broken down completely.

Na wa o too much or too little sex often causes problems in marriage. Just take the middle-ground.

Continue Reading
You may also like...
Related Topics:Daniel, Olufumilayo, zainab