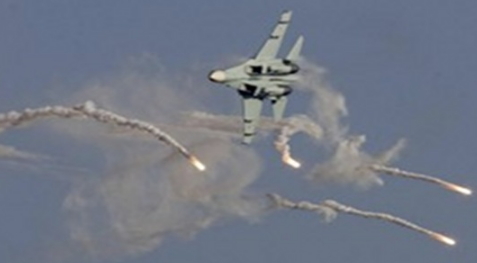 The Nigerian Air Force (NAF) on Sunday said its fighter jets have destroyed another Boko Haram’s camp and killed several of the terrorists on the outskirts of Borno state.

It said the latest air strike conducted last Friday, hit some suspected terrorists’ locations on the outskirts of Tumbin Gini and Tumbin Kayewa in the state.

NAF, director in charge public relations and information, Group Captain Ayodele Famuyiwa, who made this known in Abuja, said the air strikes were as a result of ground based intelligence and successive Intelligence Surveillance Reconnaissance reports obtained from several missions flown by its platforms.

He said a video released by the surveillance team revealed that some of the terrorists could be seen at one of the rendezvous where they were believed to be holding a high-level meeting when the jets hit the locations.

Famuyiwa, in a statement made available to Daily Sun, said the air offensive has continued to deny the terrorists a safe haven for maneuvering and carrying out their attacks. He added that the air strike has enabled unhindered advance by the surface forces as part of the ongoing Operation GAMA AIKI.

He also said the NAF had, in an earlier operation, successfully conducted air strikes on BHT Camps at Tumbin Rego on 26 August which led to the death of many high ranking members of the group.

The Nigerian army said its soldiers on counter insurgency operations in the north east, yesterday, rescued 43 persons abducted by members of the Boko Haram terrorists group in Borno state .

The soldiers were also said to have recovered a total of 500 cattle stolen by the terrorists.
Acting Director of Army Public Relations, Colonel Sani Usman said the terrorists numbering eight, had abducted some cattle rearers and livestock at gunpoint at Dalakalari, in Mafa Local Government Area of the state.

Usman said some people in the area had called to inform the military about the incident who immediately swung into action and pursued the terrorists.

He said: “The terrorists sensing danger abandoned the livestock just before Panamri village and ran away.
“The troops were able to rescue 43 persons and 500 cows taken by the terrorists”.