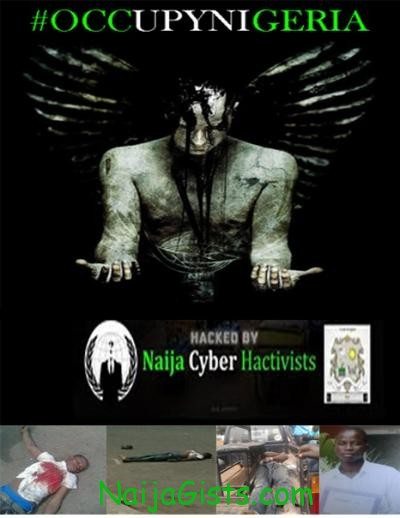 On the website, the group ominously promised the Army more attacks.

“Greetings Nigerian Army,” they wrote. “We are NaijaCyberHactivists. We and the great people of Nigeria ask for nothing but your immediate evacuation from our streets.  We shall not fold our arms and watch you harass innocent protesters.

“Please tackle Boko Haram and leave innocent protesters alone. Your failure to do just placed you in our cross-hairs. You are not untouchable as we (NaijaCyberHactivists) ain’t the government. We are coming after you! This is just the beginning!”

It will be recalled that NaijaCyberHactivists, a purported activist group, hacked the website of prominent Nigerian businessman, Aliko Dangote last Thursday because of his disregard for worker’s rights and his contempt towards a Nationwide protest of President Jonathan’s Fuel Subsidy Policy.

On January 7, the group also brought down the website of the Federal Ministry of Transportation in support of the #OccupyNigeria protest, while threatening to “continue a relentless and devastating assault upon the web assets of the Nigerian government till the people’s demands are met”.

In the most recent act, the group declared: “In source code we trust. We fighting for a cause. To make them account for all our money in their purse. Mission: Hand over the whip to the horse”.