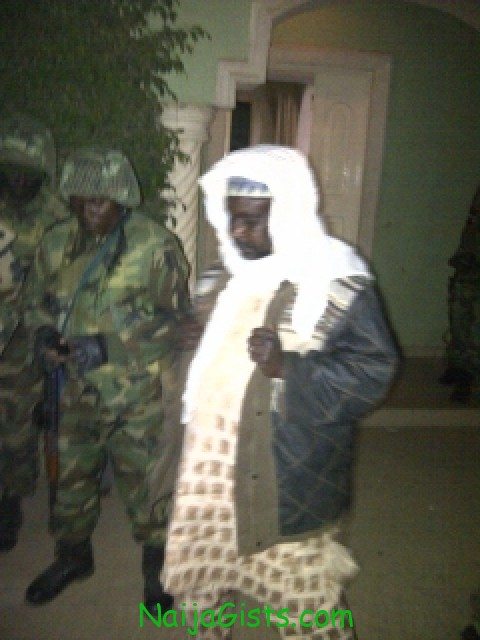 Boko Haram Religious sect is obviously moving near to judgement day as Bishop David Oyedepo, the founder of Winners Chapel Intl decreed God’s vengeance on the militant sect and their sponsors within 7 days. naijagists.com

As God will have it, one of the top sponsors of Boko Haram, Comrade Nuhu Mohammed, was on Saturday January 14, 2012 arrested while arming youths in Nasarawa Township in Chikun local government of Kaduna State.

Comrade Nuhu Mohammed, an Ex-Chairman of petroleum drivers association in Kaduna, was arrested around 1.00am by military men from the 1st Division of Nigerian Army Kaduna after a tip-off.  A search conducted on his house shows cache of rocket launchers, IEDs materials, soldier’s uniforms, army belts, cartridges, pump actions guns and some AK47 assault rifles.

He is currently being held at an undisclosed military base in Kaduna.

In another development, the suspected master mind of Christmas day bombing has also being arrested in Borno State governor’s lodge in Abuja. Kabir Sokoto was traced to the governor’s lodge through a GPRS tracker after a tip-off that he is planning to flee the country to London.

“Following a tip-off, the suspect was arrested early on Saturday morning while in hiding at the Liaison Office in Abuja. He was said to be in transit to London. For weeks, we have been working on clues that the suspect was one of the masterminds of the Christmas Day bombing,” a senior police officer.

The IG of Police, Hafiz Ringim was said to have briefed President Goodluck Jonathan on the breakthrough.