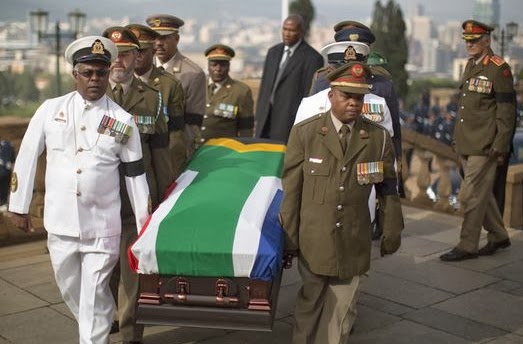 Nelson Mandela’s dead body has been transferred to the government seat in Pretoria, South Africa in preparation for his burial ceremony on Sunday.

Mandela’s corpse will lie in state in Pretoria for 3 days ahead of the funeral service.

Thousands of people lined the streets on Wednesday as Nelson Mandela’s funeral cortege proceeded through the streets of Pretoria from 1 Military Hospital to the Union Buildings, the seat of the South African government.

The coffin is to be moved back and forth from the hospital to the Union Buildings every day for the next three days, and the casket with Mandela’s body will be on display for the public to pay its respects at stipulated times.

The Union Buildings are where Mandela was inaugurated as the country’s first black president in 1994 after the end of South Africa’s apartheid system, which segregated whites and blacks under white-minority rule.

The lying-in-state comes after a memorial service in Soweto’s World Cup Stadium on Tuesday in which US President Barack Obama was among those to pay tribute to the life and legacy of Mandela.

On Friday evening, his body will be flown to Eastern Cape province for a traditional service on Saturday. On Sunday, there will be a state funeral and burial at Mandela’s ancestral village of Qunu.

Mandela’s death last Thursday at the age of 95 has sparked mourning and expressions of grief both in South Africa itself and in the international community, where he was widely seen as an icon of racial reconciliation and a moral authority.