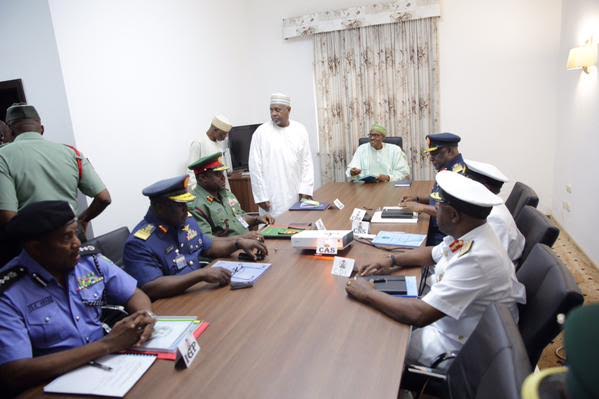 Through our investigations in the northeastern war zone, we have discovered, disturbingly that Nigeria’s service chiefs are maneuvering away from the Presidential directive to relocate to Maiduguri to command the war on Boko Haram.

In his inauguration speech, president Muammadu Buhari gave a categorical directive for the army chiefs to relocate to Maiduguri, capital of Boko Haram ravaged Borno state to actively command the war against the terrorists.

After being sworn in, president Buhari said: “The command centre will be relocated to Maiduguri and remain until Boko Haram is completely subdued. But we can not claim to have defeated Boko Haram without rescuing the Chibok girls and all other innocent persons held hostage by insurgents.”

However the Army chiefs were not happy with this order according to our credible sources and have since fought openly and covertly to make a Yola command center their primary base, so as to avoid the less lucrative, ravaged and more risky Borno capital.

Investigations revealed that, in the last couple of weeks, the army chiefs have been spending more time in Adamawa state in the villa of a billionaire friend of the Jonathan administration where they are known to always host lavish parties with polytechnic ladies.

The home of this billionaire, Alhaji Mohammed Sanusi Barkindo, a former NNPC Managing director is attached to an SSS/DSS, Department of State Security office. The house is located at Yola, north Jimeta, in Dowgirei government house area. Former president Goodluck Jonathan uses Barkindo’s bullet proof cars during visits to Adamawa state and for his campaign trips.

This subversion of order can further be interpreted in a statement given today by Army chief Kenneth Minimah, in which he made sure to mention as quoted:

“With the pronouncements of President Muhammadu Buhari and the relocation of Command and Control Centre to North-East in Maiduguri and Yola, we expect the very best result soon.”

As at report time, we have been unable to get a reaction from the Buhari administration on the actions of the service chiefs in violation of the directive as transmitted to Nigeria and the global community.

There have been calls for the retirement and investigation of the ‘bloated’ service chiefs who Amnesty international described in a recent movie as having blood on their hands.