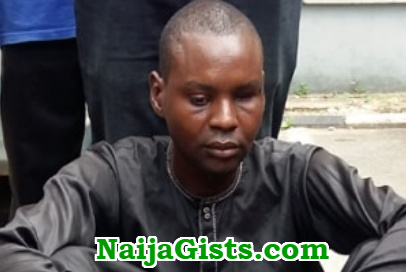 The DSS has paraded one Ibrahim Mustapha who has operated illegally as a medical doctor working for Adamawa State Government since 2015.

The State Director of Security of the DSS, Bola Olori, who presented the suspect to newsmen on Thursday evening in Yola, said Mustapha who started out as a ward attendant in Gombe State got employed in Adamawa as a medical doctor with forged medical certificates.

“He perfected the act in Gombe where he worked as a ward attendant in several clinics.

“He was aided by a practising doctor who gave him sample copies of his NECO result, MBBS of Bayero University Kano, NYSC discharge certificate and that of medical and Dental Council of Nigeria annual registration license, all of which he forged.

“The suspect subsequently gained employment into the Adamawa State Health Management Board in October 2015 as a doctor and rose to the post of Principal Medical Officer, serving at both the cottage hospitals in Mayo Belwa and Fufore.

“Prior to his arrest, the suspect had in the past five years performed hundreds of surgical operations in several hospitals in the state.

“The suspect and his accomplice have been taken into custody. They will be prosecuted after investigations.”

The DSS chief did not mention the rate of casualty in the hands of the suspect but Governor Ahmadu Fintiri, on Wednesday accused the suspect of being responsible for the death of 15 people.

Fintiri spoke during a ministerial briefing in Yola, explaining that a fake doctor, who was employed in 2015 by the State Health Services Management Board was discovered to have gone only to secondary school and only possessed a National Board for Technical Education (NABTEB) certificate.

The governor said his administration would soon set up a committee to fish out quack medical doctors in the state and bring them.