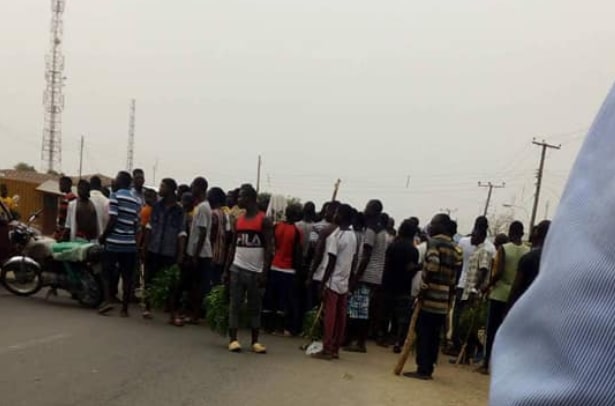 At least 2 people have died of gunshot wounds as they joined hundreds of others in a demonstration in Gurin, a community in Fufore LGA of Adamawa State, against the enforcement of a ban on use of motorcycles.

The people of Gurin had massed out Thursday morning, protesting the enforcement which the state police command last month placed against the use of motorcycles by anyone throughout the state.

The police, with support from the state government, had announced the ban with explanation that criminals were using motorcycles to steal and to abduct residents for ransom.

A resident of Gurin who spoke to our correspondent in confidence Thursday afternoon stressed that two of six demonstrators who were shot by soldiers had died.

“Yes, two people died as a result of shots by the military people,” the resident said, adding that the people decided on the protest because they could not see the reason for the ban on motorcycles in their area.

“The people are mostly farmers and need their motorcycles. It is their mode of transportation here,” the resident said.

The State Police Public Relations Officer, Suleiman Yahya, told our correspondent that there was indeed a protest in Gurin, following which the Commissioner of Police had drafted a team which he said was yet to report on whether people were killed or not.

In a reaction to the protest earlier in the day, the state government asked all Adamawa people to take the ban on motorcycles in good faith.

A press statement signed by the Permanent Secretary of the Ministry of Information & Strategy, Mr Polycarp Ayuba, said, “The use of motorcycles was banned because it was a major means of transportation used by kidnappers and other misçreants to easily carry out their inhuman and criminal activities.”

The permanent secretary added that the ban was never intended to inconvenient its law-abiding citizens but to safeguard their lives and properties; and that the ban would be lifted “as soon as the security situation improves.”