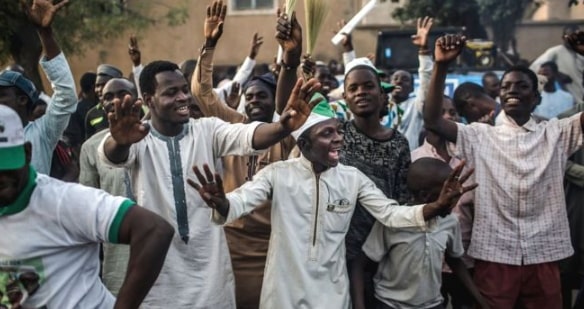 Bread and tea seller today in Yola, Adamawa state, treated ‘almajiri ‘ pupils to a free breakfast as part of activities to celebrate the re-election of President Muhammadu Buhari of the APC.

A News Agency of Nigeria (NAN) correspondent who went round the town, reports seeing the pupils queuing up in different tea and bread selling spots, most of them beaming with smiles while waiting for their turn to collect their share.

One of the sellers, Umaru Ali, told NAN that their joy knew no bound, adding that their gesture was aimed at ensuring the participation of the less privileged in the celebration.

Female petty traders engaged in frying and selling of local delicacies like bean cake (akara) and ‘masa’ also joined the fray as some of them gave out their delicacies to passer-by for free.

One of them, Hajara Yakubu, told NAN that she was a beneficiary ‘trader-moni’ programme of the Federal Government, as such had to give thanks to God that the initiator of the programme had triumphed to continue his good work.

“I have spoken to many of my friends who benefitted from the programme and they are doing same to celebrate Buhari’s victory,” Yakubu said.

On their part, most commercial tricycle operators in the town adorned their vehicles with the pictures of President Buhari as they engaged in their daily business.

Confirming the incident, the Public Relations Officer of Nigerian Security and Civil Defence Corps (NSCDC), Mr Abubakar Baba, said the issue was not a serious one and that it had been brought under control.

“It’s a minor fracas that led to road blockage but our men in that area have moved in with other security agencies to contain the situation,” Baba said.