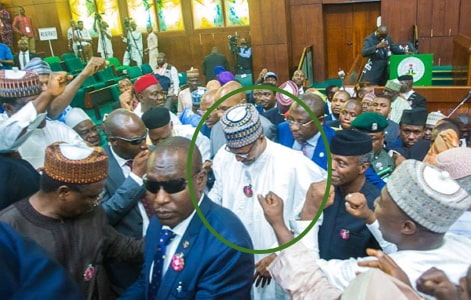 PMB was disgraced today during the presentation of the 2019 budget at the National Assembly.

Buhari was booed by some lawmakers believed to be of the opposition party as he explained the various achievements in the country. They chorused ‘No!’ at each mention of an achievement.

It was gathered that some All Progressives Congress (APC) lawmakers and their Peoples Democratic Party (PDP) counterparts exchanged blows during the presentation of the 2019 by President Muhammadu Buhari on Wednesday.

Trouble started after some APC lawmakers seized the placards which some of their PDP colleagues planned to use in protesting against the president.

When President Buhari said, “We have weathered the storms and made progress on every front,” and that “The economy has recovered well,‎” the PDP lawmakers thundered, “Nooooo! and Boooo!”

Some of the lawmakers came to the plenary with placards bearing inscription “Freedom cometh by struggle”.

Fayemi Delays Political Appointments To Settle Salaries Of Unpaid Workers Left Stranded By Fayose
Buhari And The Disruptive PDP Lawmakers: Why Tramadol & Codeine Addicts Should Be Banned From NASS