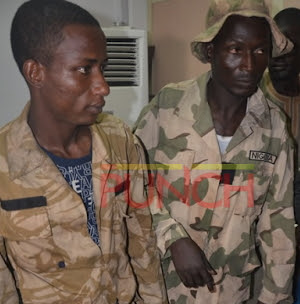 A Nigerian army officer who reportedly faked his own abduction has been nabbed in Akwa Ibom state.

The accused,  Lawal Musa claimed he was abducted around 10am last week Thursday after he left a bank in Calabar Cross River state.

However investigation revealed that he faked his own kidnap in a bid to successfully carry out an illegal operation in Port Harcourt from where he relocated to his lover’s house in Eket Akwa Ibom State.

Officer Musa was arrested at his girlfriend’s house in Eket Akwa Ibom State on Saturday.

He is currently in detention in one of the barracks in Calabar.

This is what Army spokesperson for 13 Brigade in Calabar Captain Owolabi Kayode said about the fake abduction: