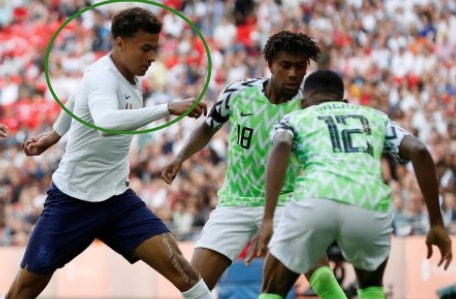 By Kick Off Sport

The friendly match between Nigeria and England ended with the later managing to carve out a 2-1 victory against the Super Eagles.

England dominated the opening 45 minutes, with Gary Cahill and Harry Kane netting the goals, before an early second half strike from Alex Iwobi made it a harder task for the hosts.
But overall, a fairly good performance from the Super Eagles with one more warm-up match against czech republic to come on Thursday.

Meanwhile, Nigeria fans gave Dele Alli a loud boo during the match and also gave him loud send-off boo as he was substituted for Delph in the last 10 minutes.

The fans however gave Iheanacho a loud cheer as he came on for Ighalo. Chelsea’s Victor Moses made way for Leicester front man Ahmed Musa.

Coach Gernot Rohr made four changes, with Ebuehi, Omeruo, Ogu and Etebo on for Shehu, Balogun, Onazi and Obi.

Harry Kane was subtituted for Danny Welbeck and Marcus Rashford came on for Raheem Sterling.

While, Nigeria made four changes at the interval and now make a fifth.

Coach Gernot Rohr made four changes, with Ebuehi, Omeruo, Ogu and Etebo coming on for Shehu, Balogun, Onazi and Obi.

Though England still leads but Nigeria’s game has improved since the Iwobi’s goal at the 47th minutes and the four substitutions.