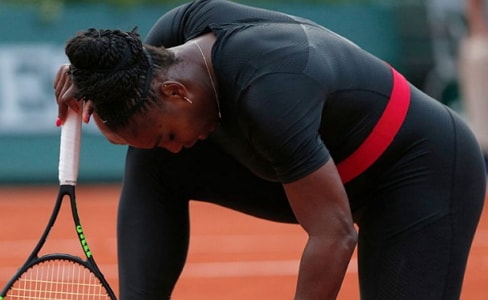 Serena Williams made a surprise pull out of the ongoing French Open on Monday thus aborting highly awaited clash against Maria Sharapova. The American at press conference called at short notice cited arm injury for the decision opt out of the clash which many fans confirmed they were eagerly looking forward to.

Williams, a triple French Open champion and 23-time Grand Slam winner, was due to renew her bitter 14-year rivalry with Sharapova in the last 16 at Roland Garros on Monday before the last minute u-turn.

Sharapova was looking to end her 14-year, 18-match hoodoo against Williams in a much anticipated grudge match, but now gets a walkover in the women’s draw.

The 36-year-old American, making a comeback after maternity leave, told a news conference she had a pectoral muscle injury.

“Unfortunately I’m having some issues with my pec muscle. Right now I can’t actually serve it’s kind of hard to play,” she said.

On Sunday Williams played a three set doubles match alongside Sister Serena which they ended up losing 6-0 in the decider, with signs that there might be some discomfort, especially when serving.

Rumours started to circulate around Roland Garros during the third set of the preceding match involving Nadal, and were confirmed when the media was summoned to an unexpected press conference.

The American had not played a warm up tournament on clay coming into Paris, and this being her least natural surface there was always the chance of physical issues affecting her if she went deep in the tournament.

She must now decide how to approach Wimbledon, which begins on July 2, and currently has no preparatory tournaments penciled into her schedule.