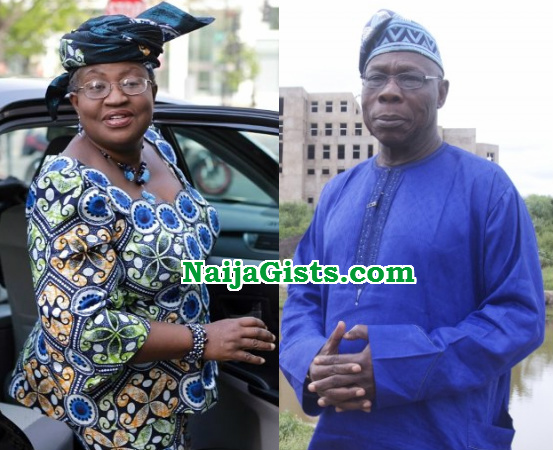 August 4, 2015 – Obasanjo: I Fired Ngozi Okonjo Iweala Because She Loves To Have Her Way

Ex-President Obasanjo has given an insight on why he removed former Finance Minister, Okonjo Iweala and why she was ineffective under Jonathan administration.

Dr. Okonjo-Iweala’s tenure has turned out to be highly controversial, with the former Central Bank of Nigeria (CBN) Governor Charles Soludo accusing her of running the economy aground.

Dr. Okonjo-Iweala maintains that she did her best.

Obasanjo, in an interview with the online publication “Premium Times” in Abeokuta, the Ogun State capital, spoke on some of the key decisions he took while in office, his relationship with some key political figures, his book My Watch and the Halliburton bribery scandal.

He said Mrs. Okonjo-Iweala performed better under him because he understood her weaknesses and managed them well.

He said the former World Bank president liked to always have her way, adding: “If I am the one in charge, then it has to be what I see as what is in the best interest of the nation”.

“She derailed because…. when Jonathan even said he wanted her, I said ‘I hope you can manage her.’ And Ngozi herself sent me a text (and) I told her times have changed.”

On what made him remove Mrs. Okonjo-Iweala as finance minister, Obasanjo said: ”I said I’ve touched reform. I’ve touched almost everywhere except Ministry of Education and Ministry of Foreign Affairs. So one day, I was in my office and the Head of Service, Yayale (Ahmed), came in. He said ‘look, you are looking not happy, what is the matter?’ I said I am worried about two ministries and the ministers who can do the work I wanted to be done there in these two ministries are already doing good work where they are. And he said ‘talk let me see.’ I said education and foreign affairs. And he said ‘who are the ministers that you think can do the job.’ I said Oby (Ezekwesili), Ngozi, and El-Rufai. He said ‘what is Oby doing for you now?’ I said Oby is doing Solid Minerals. He said ‘Sir, in all sincerity, I know you don’t like to rank ministries, but will you say Ministry of Solid Minerals is as important as Ministry of Education?’ I said ‘yes, I don’t rank ministries, they are all important. He said, ‘Can’t you take any of these three to do education and then get somebody else to do solid minerals?’ So I took Oby there. Now in the Ministry of Finance we had got debt relief, so I could afford to take Ngozi to Foreign Affairs. That’s all. And then she had Nenadi (Usman) who was the minister of state. She’s not a buffoon. And then, which is also part of her weakness, she came to me and said, ‘look’, since it’s Ministry of Foreign Affairs, she will like to take International Finance along with it. I said talk to your sister with whom you are working and I don’t see anything wrong with that provided you work out a relationship. But she didn’t accord Nenadi the recognition and the consideration that was necessary. I then said the International finance should go back to Finance and that happened. She said she couldn’t act. She put in a letter of resignation. And she had done that before, and before she could come and get people to come and beg, I announced acceptance (of her resignation).”

They refused. Now when I then saw people who agreed to take 51 per cent equity in two of the refineries; they did not promise to pay, they paid $750 million, I was dancing and I said ‘look, this is God-sent.’ My successor came (and) they cancelled it and paid them the money back. Those refineries today – you won’t get them because they’ve become scrap.”