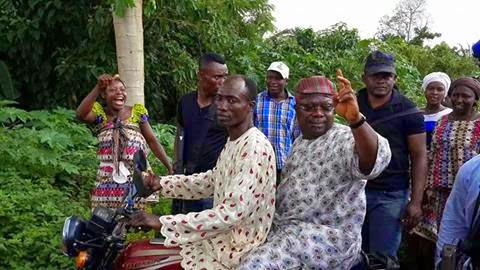 In preparation for August 9th, gubernatorial election in Osun state, the leading governorship candidates, incumbent Governor, Rauf Aregbesola of the All Progressives Congress, APC, and Iyiola Omisore of the Peoples Democratic Party, PDP, are locked in a war of words over who has the better credential to run the state.

While Aregbesola lambasted Omisore at a campaign rally in Ikirun in Ifelodun Local Government Area of the State, warning him not to over-step his boundary, Omisore fired back at the governor, describing him as a half-educated person.

Aregbesola also boasted that Omisore was not a threat to him in any way, adding that ‘as Aregbesola, I have come to rebuild the state for another four years.’

The governor said at the rally that he had not completed his mission in the state and told Omisore to behave well before, during and after the election.

Aregbesola also said he needed another four years to consolidate APC’s hold on Osun State and send PDP packing from the state at the end of his second term in 2018.

Responding to Aregbesola, Omisore’s aide, Diran Odeyemi, dismissed the governor’s threat as empty and of no effect, adding that Aregbesola could not equate himself with Omisore in any way and that the governor was half-educated for him to have made those remarks.

Other PDP stalwarts have equally boasted about reclaiming Osun and other Southwest States, including Lagos, from APC in August and during the 2015 general elections.