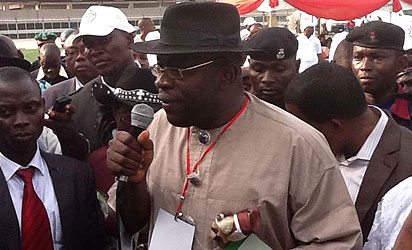 With tight security in place and the incubus of a court order, the People’s Democratic Party went ahead to hold its governorship primary elections today and declared its anointed candidate, Seriake Dickson, winner.

In the election boycotted by National and state assembly members of the party in the state, and which also excluded the incumbent governor, Timipre Sylva, the party conducted the election at the Samson Siasia Stadium in Yenegoa.

In the result announced by the chairman of the electoral committee, Navy Captain Caleb Olubolade, a former military administrator of the state and a minister, Dickson was said to have polled 365 votes. It was a no-contest as no other candidate polled more than a single digit vote. Francis Doukpola got just one vote, Kalangho Youpele, one and Fred Ekiyegha, two. Austin Febo, who was the fifth aspirant staged a walk-out, but got two votes recorded against his name. Two other aspirants who also boycotted the vote, said to be a charade, were Christopher Fullpower Enai, and Bolobou Orufa.

Seriake Dickson thanked all the delegates and his rivals especially Chief Francis Doukpola, Youpele Kalango, Fred Ekiyegha and others for courage, promising to run an inclusive government when voted into power next year.

The primary was mired in several layers of controversy as several candidates were excluded, including the businessman, Ben Murray Bruce, former boss of the Niger Delta Development Commission, Timi Alaiba and the incumbent governor, Timpre Sylva. The latter got a court order to stop it, on grounds that he had emerged as the candidate in another primary conducted by the party earlier.

The order by an Abuja Federal High Court kept away the Independent Electoral Commission, which ought to have sent observers to watch the election. But the PDP ignored the order, on the grounds that the Electoral 2010 excluded the courts from intervening in primary election disputes.

Idowu said that INEC had received a court injunction restraining it from going ahead with the gubernatorial primary.
“INEC will not monitor Bayelsa PDP primary, we have received court order and INEC as a law abiding commission will not monitor the exercise,’’ he said.

But the PDP by holding the primary has gone to show that it is above the law, observers suggested.(pm news)