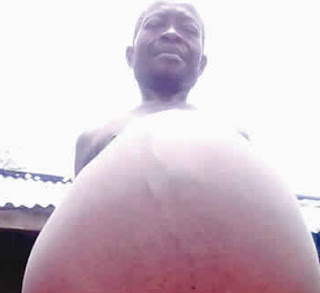 This 62-year-old man needs your help more than ever before as his medical condition is at a stage now where if nothing is done, he will lose his life.

Mr Justice Nzondu who has been abandoned by his family is now living alone in his thatched home in his village in Umuonyeka-Umueze Ihitteaforukwu in Ahiazu Mbaise Local Government Area of Imo State.

His condition is that his stomach won’t stop growing ever since he fell from a tree 8 years ago. 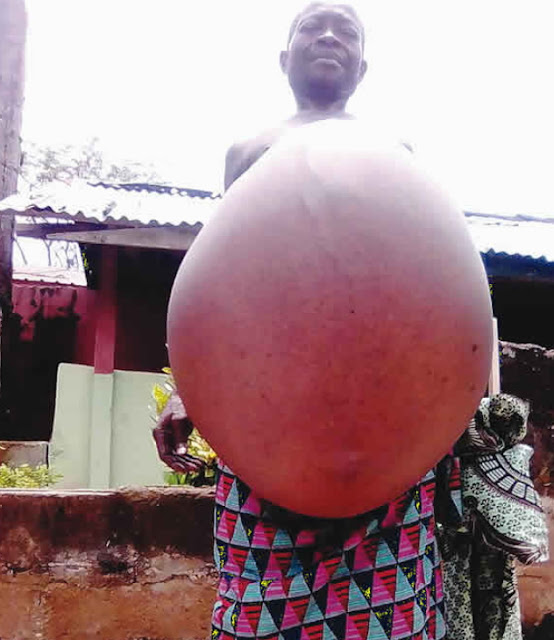 Mr Nzondu health has grew from hopeless to helpless.

Here is how the Lagos-based driver who is now confined to his hometown in Imo state told Saturday Features:

“I was a private driver for someone based in Lagos. I came home for holiday and I decided to climb my oil bean (ukwa) tree to harvest it.”

That was his undoing. If he had known, he probably wouldn’t have bothered the ukwa tree as just as he was about to harvest the oil bean, he fell from the tree.

“I broke my spinal cord. I couldn’t walk again. When I fell, I lost consciousness. I passed out but God revived me through the medical treatments I got. I had to be confined to a bed for two years.”

And as if that was not enough trouble, his stomach started getting big and bigger and bigger till it got to this unimaginable state.

But when it got to the stage where he couldn’t take it any longer, he sought medical attention in several hospitals where, according to him, he was diagnosed with having “accumulated fat” in his stomach.

“I have gone to so many hospitals, including National Hospital, Abuja where I was asked to do so many tests including a CT scan. It was the scan that revealed that I have accumulated fat. The doctors said it happened because I couldn’t walk and because I have been confined to a place for a long while.

It was in Umuahia, Abia State that a group of Indian medical experts also carried out more tests. They also said I was suffering from accumulated fats in my stomach which was brought about by the spinal cord injury that I sustained.

“I had to stop eating fatty food. The doctors advised me to stop taking such food so as not to aggravate this condition. But nothing has changed. My stomach is this big. I am really disturbed”.

“My wife Eucharia left me with our 10-year-old child. I couldn’t take care of our son because of my condition, so somebody had to take him to train him for me. My wife said she couldn’t continue living with me as she didn’t understand this kind of illness. She said she was tired of taking care of me. I have not seen her and I do not know where she is since she left me.”‘

He is now being catered to by his niece, 24-year-old Blessing Nzondu who shuttles between Rufus Giwa Polytechnic in Owo Ondo state to Imo state every weekend.

“Blessing is in Year Two. She shuttles between home and Owo every other weekend to cook for me.

“When she comes home, she cooks plenty food that would last until she comes back next time. She makes sure that everything is in order, including my drugs before she leaves for school.”

And since Blessing comes home once a week, Uzondu said he is just able have a bath once a week, at least when his niece helps him to clean his body.

“There is no other person to help. I just manage to have my bath once a week, when Blessing is around. If she goes, that means I will not bathe until she comes back,” he said.

Aside from the emotional and psychological pains he has had in the last eight years, Uzondu said the physical pain is more excruciating and exasperating.

“I have endured excruciating pains and trauma for years. I experience loneliness. I have been stigmatised by everybody. People have abandoned me. My world has crumbled at my feet. I lost my job, I can’t even get another job and I don’t know when my condition will improve for the better.

I had spent my little savings on my medical expenses. To even eat now is problem because there is no money. I know I am hard working. If not for this condition, I would have been working. I only urge well meaning Nigerians to come to my aid and help me get out of this situation by contributing to my surgery.”

“Nobody wants me to sit beside them in the vehicle anytime I have to board public transport for medication. They would accuse me of being the source of their troubles. It has been so painful. I remember during one of my trips to Lagos where I had also gone to seek medical attention, a man accused me of sleeping with another man’s wife. He said I brought curse upon myself because of the abomination and that’s why my stomach is this big.”

He said Indian doctors told him to raise N6million urgently so as to go for a life-saving operation in India.