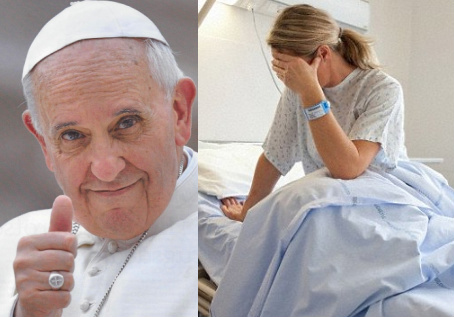 Here is what the controversial Pope Francis told journalists today on a return flight from a six-day visit to Panama.

“Abortion is a “terrible’’ drama but women who go through it must find mercy rather than castigation.”

“To really understand the drama of abortion you have to be in a confessional, (it is) terrible.’’

“In the confessional, you have to offer consolation, not punishment.”

If a woman is tormented by an abortion decision, she should “talk’’’ to her unborn child and “sing the lullaby (she) could not sing to him,’’ because the child “is in Heaven.”

“There you find a path of reconciliation between the mother and the (aborted) child. Because God has already forgiven. God always forgives’’.

During the Panama trip, the pope led a mass in which a young man denounced abortion as an act of “terrible cruelty,’’ and prayed for abortion laws around the world “to be erased forever.’’

Last year October, Pope Francis said women who opt for abortion are like people who hire “a hit man to solve a problem.”

According to his critics, such statement is capable of pushing more women to have abortions.