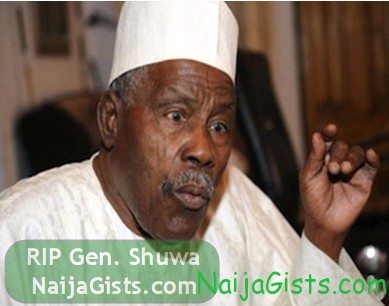 General Muhammadu Shuwa, a retired army general has been assassinated in his home in Maiduguri, Borno State Nigeria. naijagists.com

We learnt General Shuwa was shot dead at close range by some suspected assassins while attending to visitors at the entrance of his home in Gwange area of Maiduguri, Borno State around 11:30am on Friday.

Another northern statesman, identified as Mamman Shuwa was also killed in the assassination.

A source from Maiduguri Teaching hospital said General Shuwa was declared dead on arrival at the hospital.

The deceased has been buried according to Islamic rite at 4pm today.

As at the time of this report, no group has claimed responsibility for the assassination yet.