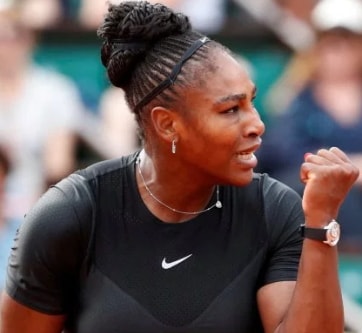 Serena Williams went for a striking cat suit look as she returned to Grand Slam action with victory in the first round of the French Open Tuesday.

Dressed in a figure-hugging black outfit with a pink band around her waist, the 36 year-old American ,saw off world No 70 Kristyna Pliskova 7-6, 6-4 in an hour and 45 minutes.

While clearly not at the kind of physical level that has brought her 23 Grand Slam titles, Williams showed that a winner’s mentality remains intact as she came through a stern examination after weeks of preparation on the clay

Playing her first Major since the birth of daughter Alexis Olympia on September 1, she is determined to show that the competitive fire still burns bright.

‘I’m very happy,’ said Williams. ‘She played really well; she made a lot of aces (15). Two years has been a long time but I trained really hard on the clay. I’m taking it a day at a time.’