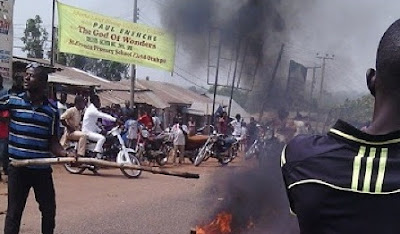 September 28, 2017 – 2 Young Men Lynched  For Stealing A Motorcycle This Afternoon

The victims who were caught with a missing Bajaj motorcycle this afternoon were lynched by angry youths when a man raised an alarm.

The two young men would have been spared from death but all efforts made by the community elders to get police to come over failed as the youths insisted on killing them to serve as deterrent to others.