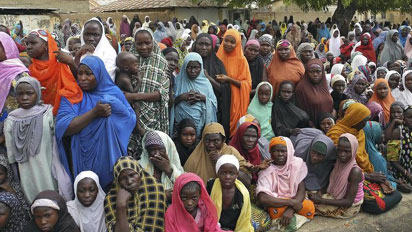 The ultimate goal of all Boko Haram terrorists is to bear more children and increase the membership of the terror sect and produce Boko Haram foot soldiers in the future, Borno State governor, Kashim Shettima, has revealed

Shettima who received 427 babies and children, and 149 mothers rescued from Boko Haram enclave and handed over to Borno State government by the military yesterday at a newly opened rehabilitation and reintegration centre in Maiduguri, said members of Boko Haram strive to bring up children to take up their weird belief and perpetrate terrorism.”

An average male member of the Boko Haram has one great wish and that wish is for his son or daughter to inherit his doctrine of violence. The insurgents seriously take to child-bearing as a strategy of not only multiplying their numbers, but also producing children they hope, will continue from where their fathers stop in violent killings, as their own form of worship.

General Officer Commanding (GOC), 7 Division of the Nigerian Army, Brig Gen Victor Ezugwu, while handing over the freed children and their mothers said the military has screened the hostages after regaining freedom from Boko Haram through the clearance operations conducted by the Nigerian forces.

The handing over of freed persons from Boko Haram bondage by the military was the fourth exercise since insurgency heightened in the state.