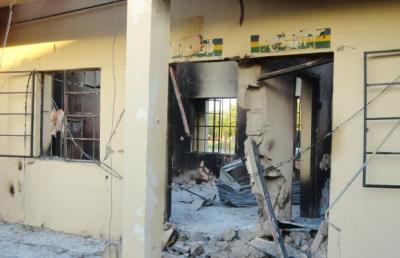 The nine suspects were arrested  yesterday night in Abuja. Sources gave names of seven of the alleged perpetrators of the attacks as Mohammed Musa Kafinta; Abbana Madu Melle; Babakura Madu Melle; Ba’ana Barbadus; Madu Melle; Suleiman Umar and Mohammed Ali Waziri. The names of the other two could not be confirmed as that the time of this report.

“I can conveniently tell you that the manhunt in the last 72 hours by the JTF (comprising the Army, the Police, the State Security Services and other intelligence agencies) has led to the arrest of nine suspects,” a source said in a Nations Newspaper report. “These suspected Boko Haram members were holed up at a secret base in Gujba where they were arrested at about 8.30pm on Monday. The JTF’s preliminary interrogation of the men revealed that they were among those who executed the bombings in Damaturu and Potiskum at the weekend.”

The reports of the arrests come days after the US embassy allegedly warned that Boko Haram planned to attack three luxury hotels in Abuja. The National Security Adviser ((NSA), Gen. Owoye Azazi, has subsequently dismissed the warnings saying: “The attention of the Federal Government has been drawn to a publication making the rounds in the media of planned attacks on three major hotels in the Federal Capital Territory (FCT), Abuja. Expectedly, the publication is eliciting unhealthy public anxiety and generating avoidable tension.??“

The current threat of attack on the three hotels in Abuja is not news, and for over three months, the security services have taken pro-active measures to protect the designated critical facilities and others.?