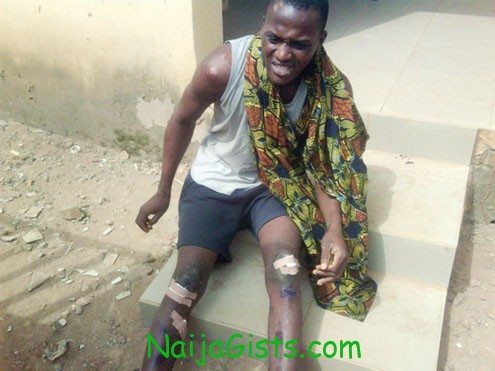 The victim, Seun, in pains at Ejigbo court yesterday

An angry father, Dennis Akpati, who caught a graduate of the Lagos State University, Ojo Lagos State, southwest, Nigeria, Seun Ogunbanwo in his house allegedly raping his 20-year old daughter (name withheld) and sliced his penis with a machete is to be charged to court for assault.

Ogunbanwo, a graduate of Business Administration who recently finished  his NYSC was allegedly caught having sex with Akpati’s daughter inside her father’s flat at 52, Tijani Alabi Street, Ijegun, on the outskirts of Lagos. naijagists.com

The angry father, it was learnt, attacked the graduate with a machete and beat him mercilessly. The unlucky graduate was seriously manhandled and later the machete was used to slice his penis to deter him from future attacks on girls.

He was handed over to the police who took him to the hospital for treatment and later charged with having an unlawful carnal knowledge of a 20-year old lady before the Ejigbo Magistrates’ Court, Lagos.

The accused was brought to court by the police to face the charges but when the presiding magistrate, Mrs. M. B. Folami, saw the pitiable state of the accused, she ordered the police to arrest the father of the victim (Akpati) and others involved in the battering of the accused and charge them to court for assault.

She explained that under the law, the accused is presumed innocent until found guilty, adding that nobody should be allowed to take the laws in his hands. naijagists.com

Ogunbanwo was alleged to have sneaked into Akpati’s home when the victim was alone and forcefully had sex with her. The father allegedly caught him on top of his protesting daughter.

The girl, it was gathered, was crying and attempting to free herself from him when her father came in. The father was so angry that he reportedly took a machete and cut Ogunbanwo all over his body, including his penis.

Speaking with P.M.NEWS on his way to the hospital with his police escort, the accused said the girl was his friend and that they lived in the same area.

He said that it was her father who macheted him when he met him in his house with his daughter. He said others later joined him in attacking him.

He did not deny that he slept with the girl.

He was charged with housebreaking and rape, offences punishable under Sections 411 and 358 of the Criminal Code, Cap. 17, Vol. 2, Laws of Lagos State of Nigeria, 2003.

He pleaded not guilty to the charges and the court granted him bail in the sum of N100, 000 with two sureties in like sum. The matter has been adjourned till 18 January, 2011. (pm news)