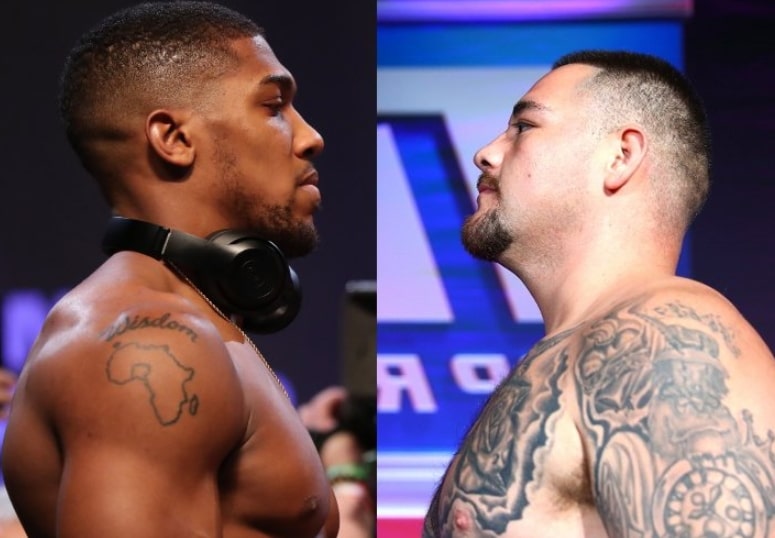 Anthony Joshua On US Debut “I Will Be More Aggressive”

British Nigerian singer Anthony Joshua has warned Deontay Wilder and Tyson Fury they risk facing a better version of him if frustrating fight negotiations drag on.

The 29-year-old says the bout will showcase evolving methods he began to use after beating Wladimir Klitschko.

“I’ve got through with strength, guts and heart,” said Joshua. “I’ve got away with mistakes. I realised I couldn’t continue my journey like that.”

“After Klitschko, I thought ‘how many more fights can I have like that before the mistakes aren’t there any more?’

“For the last two years, hand on heart, with my team, we spend so much time doing things outside of boxing, things that can drain me.

“How do we now train smart to become smarter in the ring? Less quantity, more quality. It didn’t happen over night. It has taken two years to implement it and this is the first camp we are really seeing it.

“Look at my last fight against Alexander Povektin. I was ill, tired, had a flu, had a headache. I was going through changes. It will be interesting as this is the first time I can express these things.

“The longer Wilder and Fury leave it, the tougher it will be for them as I am not the fighter of two years ago. Give me another year or two and I’ll develop that little bit more.”

Joshua was complimentary of both Fury and WBC champion Wilder’s displays in their December draw, but BBC Radio 5 Live boxing analyst Steve Bunce believes the assertion he will improve in coming years is a “subtle way to tell them to get to the negotiating table.”

Failed talks with both parties led to Joshua’s team opting to tackle a US breakthrough with his next bout, plans that were hampered briefly when original opponent Jarrell Miller failed drug tests.

American Ruiz has 32 wins from 33 fights going into the Madison Square Garden bout.

Joshua admits he sits in an awkward position in striking the balance between showcasing the refined boxing skills he has worked on, while ensuring a “devastating” and eye-catching finish to impress the US market.

The IBF, WBA and WBO champion will travel to Florida this week to conduct the late stages of his training camp, before moving on to New York aiming to extend his perfect 21-fight record.

“Sometimes I’m sparring now and yesterday (Sunday) I was tired so I thought I’d work on not getting hit”.

“Then I thought to myself, is it a bit boring as people want to see us going out there entertaining? The sweet science and the entertainment – how do you meet that in the middle?

“I can’t just go in there and display a good jab. They want to see something a bit more aggressive.”

Joshua’s trainer Rob McCracken has insisted on the team using their own unit to train in the US rather than using an existing gym in order to avoid distraction and maintain routine.

He says Joshua’s US debut is “as big as it gets” for the Briton and echoes improvements in the champion’s approach to the sport.

“The hardest part of the camps are sparring and running. He has to run as he’s a big guy and needs to move his legs in fights so therefore has to do an element of running. A lot of heavyweights don’t run, he does.

“Sometimes we move sparring days if he doesn’t feel great. It’s me that has to persuade him.

“As he’s gone on though he has more experience. He was so keen when starting out that he’d tell you a white lie. As he has learned the game and knows it’s not to good to be in the ring if you’re exhausted from the schedule.

Continue Reading
You may also like...
Related Topics:aggressive, anthony joshua, us debut