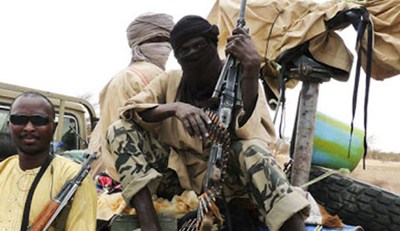 As Nigerians elsewhere celebrated the 55th independence anniversary, it was a bitter day for residents  of Kirchinga, in Adamawa State, as Boko Haram visited and killed five people, leaving blood in their trail. An online agency reported yesterday that the insurgents slit the throats of five residents in an early morning attack.

Sambisa forest, was one of the areas once annexed by Boko Haram insurgents last year.
It was, however, later cleared of terrorists after Boko Haram was routed by Nigerian troops in a counter insurgency operation.

A  fleeing resident of the village, Ahmad Musa, told the news agency that the insurgents struck the village at about 12:30am yesterday and started firing sporadic shots while razing buildings, making residents to flee into nearby bushes.

The resident said  the insurgents slaughtered five trapped people, including three women and two men.
“We are now in deep sorrow,” said Musa.

He also lamented how the insurgents had a field day and operated unchallenged for many hours due to complete absence of security personnel in the area.

Another resident of the area, John Apagwu,  urged government to deploy more security personnel for us because as Nigerians, government owes us a duty to protect us.”