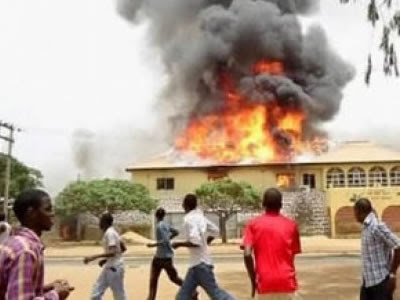 An embattled Nigerian city was in lockdown on Tuesday following a spate of blasts and persistent gunfire in a neighbourhood seen as stronghold of Islamist insurgents, residents told AFP.

“It is terrifying,” said one resident of the Gwange area in the northeastern city of Maiduguri. “We sat up the whole night because of gunshots and explosions. Everybody is inside because it is not safe to venture out.”

About a dozen explosions were heard in the area late Monday, with some reports suggesting a telecom mast and primary school were set ablaze.
Residents said the military then swarmed the area, engaging suspected Boko Haram Islamists in running gun battles through the night and into Tuesday.

“A bomb has just gone off not far from my house. I am now crouched behind my couch,” said the resident, who asked to not be named.

Maiduguri is considered the base of Boko Haram, blamed for killing more than 1,400 people in Nigeria since 2010, and security forces have alleged that Gwange and the surrounding districts are rife with insurgents.

Another resident of the area said he and his neighbours have “been indoors since yesterday evening.”

Suspected Islamists “were chased by soldiers through this neighbourhood while the explosions and shootings continued through the night,” he said, also requesting anonymity.

It was not immediately clear if the overnight violence had caused any casualties, but Maiduguri has seen dozens of deaths in recent days.
Last week, residents claimed as many as 30 people were killed during a rampage by soldiers after a bomb attack that left at least three troops dead in Gwange, although the military denied the allegation.

The military has not yet commented on reports of the latest violence.
Maiduguri has been among the places hit hardest by the Islamists, but they have also struck across the country’s mainly Muslim north as well as in some central areas.

Security forces have responded with heavy-handed tactics to Boko Haram attacks, with Human Rights Watch reporting last week that Nigeria’s military may have committed crimes against humanity in operations aimed at crushing the insurgency.

Nigeria is Africa’s largest oil producer and most populous country, where most people in the south are Christian.(PM reports)