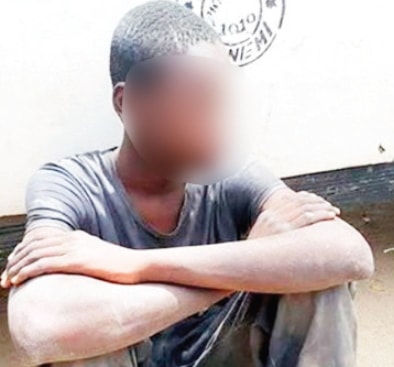 Pictured above is Ali Goni, the most deadly Boko Haram terrorist ever.

According to the military, the 15 year old teenager was kidnapped in Bama alongside his family when he was in Primary six (at age 10).

He was taken to a camp in Sambisa Forest where he was trained various techniques that can cause maximum destruction to lives.

Goni who is currently being de-radicalised at a military detention camp in Maiduguri recently disclosed that he assembled IEDs with fragmented materials and configure them for suicide missions.

He said he introduced the use of padlock to IEDs, which can hardly be demobilized or detected by bomb detectors.

‘I was in demand’. I was kidnapped along with my mother in Bama’s Kawuri Street by Baba Kaka, a dreaded Boko Haram commander. They took us to Sambisa Forest and kept us in a camp called Kwalfata.

“We underwent various training in the camp. During the course of our induction training, I was selected to be trained on bomb-making techniques, bomb detection as well as identifying and demobilising explosives.

“I refused initially, but they said they would kill my mother the way they killed my father when they stormed Bama. So I eventually agreed. During the training, many of my colleagues died while trying to make bombs. In the end, I emerged the best of all.

“My job was to make many bombs that would be used for suicide missions. I was working under the supervision of Baba Musa, a 70-year-old man. Musa also taught me the new technique of making underwear IED with a padlock. “At some point, I was the only bomb maker when all those I was trained with were killed by the military during several attacks.

So they took me from camp to camp to make IEDs for suicide missions. “I was in Kangarwa, Pulka, Banki and other camps. I managed to escape when the military bombed our camp in Baga. I ran to Cameroon where I surrendered to the Cameroonian forces. I was later handed over to the Nigeria military.”

Ali Goni said he hopes to join the Nigerian military in the future and help them to identity IEDs.