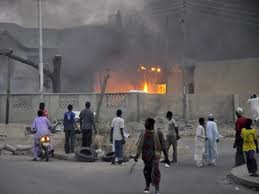 Bomb explosions, and a suicide blast hit 2 police stations today in the city of Sokoto, the historic seat of Islam in the country, police and residents said.

The Boko Haram Islamists, responsible for scores of deadly bombings in recent months, are suspected of having hideouts in Sokoto, but the group has rarely attacked within the city.

A senior police officer, who requested anonymity, said a suicide bomber approached the Yan Marina police station in the centre of the city in a car packed with explosives.

The bomber was denied entry at the security gate, where the vehicle blew up, according to the officer.

A resident near the station, Usman Bube, said the area was “engulfed in flames.”

“There was a huge explosion about an hour ago at the police station that was followed by thick smoke,” Bube told AFP. “It is so chaotic now, with people running to safety.”

“We had a loud explosion around the police station. The impact of the explosion shook houses in the area. We all moved indoors,” he said.

There was no immediate report on casualties.

Boko Haram has repeatedly targeted the police across northern Nigeria, where most of their attacks have been carried out.

The radical Islamist group has long stated its loathing for Nigeria’s traditional Muslim leaders, saying they have betrayed the faith by subjecting themselves to the country’s secular government.