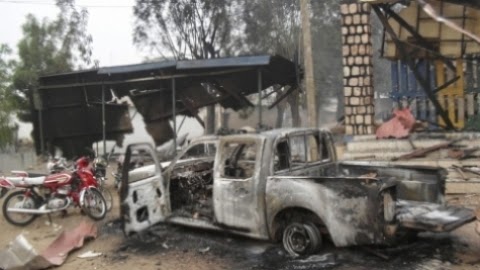 The Boko Haram sect has attacked another town, Askira in Borno State, some fleeing residents of the town told journalists in Maiduguri on Tuesday.

According to one of the residents of the town, Yusuf Mohammed, who fled to Maiduguri, the insurgents attacked the town in a convoy of Toyota Hilux vehicles and motorcycles at about 3.35 pm on Monday.

He said the terrorists, who were armed with Improvised Explosive Devices and petrol-bombs, torched several public buildings, including a secondary school, the Divisional Police Station and telecom masts.

Mohammed, who arrived Maiduguri on Tuesday morning in a pickup van with some other passengers, said, “As we were about to depart the motor park yesterday (Monday) afternoon, we saw some insurgents chanting Allahu Akbar (God is great) in Arabic.

“They burnt down a school in the town. They did not stop there they proceeded to the police station and a health centre and threw IEDs at the buildings.”

The residents of the town who, he said, were shocked, fled into the bush and nearby communities.

Inuwa said their vehicles were mounted with Rapid Propelled Grenades and they shot sporadically and chanted Allahu Akbar (God is great, in Arabic).

He narrated that he had to flee along with six passengers in the taxi to Maiduguri through Mbalala-Chibok Road.

On casualties, he said, “I cannot give you the number of casualities but we saw some bodies on the road, while we were fleeing towards Mbalala.”

Askira is a predominantly farming community bordering Adamawa State, and 252 kilometres south of Maiduguri, the Borno State capital, the birthplace of the Boko Haram insurgency.

A police source told our correspondent that there was a report of insurgents’ attacks on one of the towns in Southern Borno Senatorial District.

He said, “I cannot give you the casualty figure, but some public buildings were burnt, including our station in Askira town, 60 kilometres west of Uba near Mubi town in Adamawa State.”

Meanwhile, about 143 Boko Haram fighters were reportedly killed in an attack on a military camp in Cameroon on Monday.

The Cameroonian Minister of Communications, Issa Bakary, who said this in a statement on Monday, added that it was the heaviest loss sustained by the Boko Haram sect in the country.

He said, “The terrorists lost 143 members and important warfare equipment made up of assault rifles of various brands, heavy weapons and bullets of all calibres.

“On the Cameroon side, we lost one life, Corporal-Chef Bela Onana, while four other soldiers were wounded.”