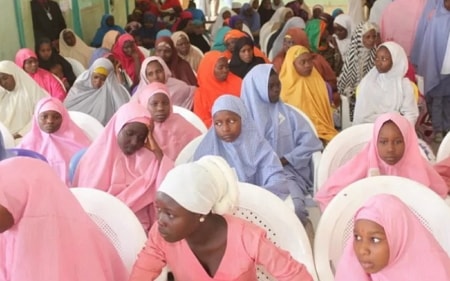 Some of the freed Dapchi school girls relived their ordeal in the Boko Haram custody.

Security sources told The Nation that troops were asked to withdraw from their camp shortly before the insurgents arrived with the girls in over 11 trucks and went into the town to drop off the girls.

“Boko Haram drove into Dapchi and dropped off the girls and went back without us firing a shot. We were asked to leave our camp shortly before we saw the insurgents driving through our checkpoint to drop off the girls,” the source said.

Kachalla Bukar, one of the parents who received the insurgents in Dapchi, said he had a good time with the insurgents, shaking their hands and taking photographs with them as they exchanged pleasantries.

“Boko Haram came here very early in the morning. We got information that they were coming into Dapchi with our daughters. Some people ran out of the town when they heard the news that the insurgents were coming into town but some of us whose daughters were abducted refused to go anywhere.

“One thing they told us was that we should not send our children back to western education. They told us that what they did was not terrorism, but just to teach us a lesson – that if we dared send the children back to the school again, they would abduct them and not send them back to us. They preached to us and left. We are very happy today,” Kachalla said.

One of the released girls Khadija Grema relived her experience. She said: “The day they abducted us in the school, they came when we were about to break our fast. Everyone was confused and people were screaming. One of them said we should come close to him. They were shooting and everyone was confused.

“We ran towards the gate of the school. When we got there, they called one Babangida to bring the vehicles, and they began to drive us away.

“Outside Dapchi, they asked who are the ones fasting? And some of us that were fasting were asked to come down from the vehicle. They gave us Maltina, meat, groundnut cake and ‘pure’ water. We had our prayers after breaking the fast. Then we continued our journey, until we got to a place with a big tree. They stopped and we were asked to cook food.

“After eating, we continued the journey for a long time, until we got to a place where there is river. We came down from the trucks and they asked us to enter some canoes that took us across the river. Across the river, they took us to a house in one village that I don’t know; we stayed there for some time. Then, late in the night, they came to ask us to come out and we were taken to the river to continue the journey until we got to a thick forest. That was where they kept us; and they did not change our location until they brought us back.”

Speaking on how they were treated by the insurgents, Khadija said: “They fed us very well; they treated us very well. They did not beat us; they did not maltreat us. The people that took us away were all speaking Kanuri and Arabic. They didn’t tell us any meaningful reason when we were freed and returned. They just said we are Muslims and they felt it was right for them to free us so that we will not suffer. They did not molest or sexually harass us. They even said it was wrong for women and men to sit in the same place.”

Khadija went on: “Five girls died while we were on the way to the bush; most of them died because they were trampled upon inside the vehicles. They freed all of us, except one girl who they said was a Christian and they held onto her.”

Khadija’s story on the Christian girl, Leah Sherubu, was collaborated by some residents who said she was brought to Dapchi along with the girls but was taken back because she refused to renounce Christianity as instructed by her abductors.

That story was, however, disputed by some of the girls who claimed that Leah was left behind for the journey because of her strong stand not to renounce her faith.

Ibrahim Husaini, a relative of one of the released girls who also had a parley with Boko Haram men when they brought back the girls, said: “Boko Haram came this early morning, telling the general public that they should not allow their girls to go back to western education system because what they did is not terrorism but the teaching of Islamic right.

“Apart from that, the girls were brought with the absence of security personnel. I don’t know whether they were close and they refused to go. They just dropped the girls and find their way, telling the general public that the girls should not go back to their school.

“We feel very happy because for the past 30 days that the girls were abducted, I have not been happy but today I am in a good mood, I can interact with anybody any time,” Ibrahim said.

Some of the parents were not happy that the girls were taken to Abuja few hours after they were released.

They told our correspondent that they were afraid that soldiers who could not protect their children from Boko Haram are the ones who came “to take our children away from us after they were released”.