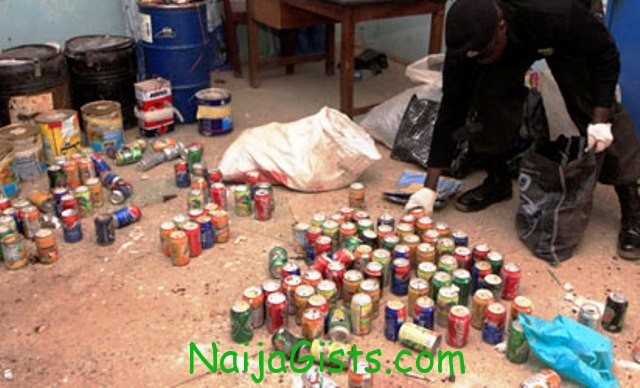 Yet another Boko Haram‘s bomb production factory has been discovered during a raid in Adamawa State. naijagists.com

The owner of the home turned bomb factory who happens to be a Boko Haram member wasn’t at home during the raid.

Here is what head of secret Police in Adamawa said

“We located a house in Wuuojabbe district in Jimeta where IEDs and other forms of explosives are manufactured,” Jayeoba said of the Monday night raid, in an interview with AFP.

The factory owner’s wife told authorities he had not been there for about three days. She was not arrested as she was apparently unaware of the alleged bomb-making activities.

United States embassy in Nigeria warned on Wednesday that Boko Haram may be planning attacks against hotels or other areas in the Nigerian capital Abuja.

May God continue to reveal their secrets in order to prevent more bloodshed in Nigeria.