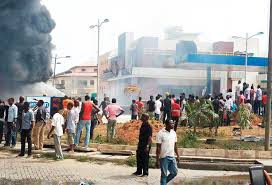 Another attempt by Boko Haram to cause bloodshed in Jos has failed.

Today, vigilant members of ECWA Church in Tundunwada area of Jos found some bombs planted by some suspected Boko Haram militants inside the church’s toilet and threw the IEDs outside.

Few minutes later, the bomb exploded with no casualty reported.

Anti-bomb squad were reported to have arrived at the scene of the explosion few hours later.