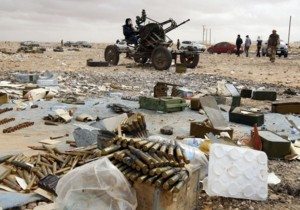 Nigeria’s military said Wednesday that two suspected Boko Haram Islamists who were trying to smuggle heavy weapons into the country were killed by troops during a shootout on the border with Chad.

The alleged insurgents were caught carrying rocket-propelled grenades, Kalashnikov rifles as well as other assorted ammunition and weaponry, Sagir Musa, a military spokesman in the northeastern town of Maiduguri told AFP.

Maiduguri, considered Boko Haram’s base, has seen some of the worst violence blamed on the radical Islamist group, which is charged with killing more than 1,000 people in Nigeria since mid-2009.

“The interception was carried out around 2100 on Monday at the Daban Masara border,” Musa said, referring to the crossing just north of Maiduguri.

“Two suspected Boko Haram members escorting the consignment were killed in an exchange of gunfire while the third fled,” he added, claiming “the weapons were heading to Maiduguri for terrorist attacks.”

The crossing on Lake Chad is also close to the borders with Niger and Cameroon.

The troops who killed the suspected insurgents were part of a four-country multi-national force set up several years ago partly to stem the flow of illegal weapons through the porous border regions, Musa said.

Some security analysts say that Boko Haram regularly purchases weapons from markets in Chad and Niger.

There is also speculation that the radical Nigerian group has benefitted from the weaponry that poured out of Libya during the conflict that toppled ex-dictator Moamer Kadhafi last year.