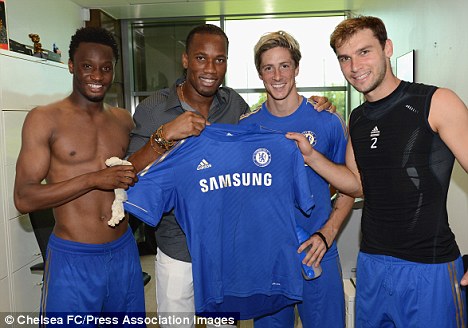 As at today the 23rd of November,  FIFA has denied Drogba’s request for special permission to leave Shanghai Shenhua on loan ahead of the official transfer period, ending speculation he could join former club Chelsea immediately.

FIFA says it informed Drogba he won’t be exempted from international transfer rules while under contract with the Chinese Super League club, whose season ended this month.

Didier Drogba has asked FIFA for special permission to move on loan from his Chinese club despite being outside the official transfer window and Chelsea are keen to re-sign the striker.

FIFA said Wednesday it is considering the former Chelsea forward’s request for an exemption from international rules and Sportsmail understands that the Stamford Bridge club are keen for the striker to return to west London, even if it is just for a month.

‘The FIFA administration services are looking into it,’ FIFA said in a statement.

If FIFA grants Drogba’s request, the 34-year-old Ivory Coast captain could play for a new team to prepare for the African Cup of Nations, which kicks off on January 19 in South Africa.

Existing rules prevent Drogba from representing another club until January 1.

FIFA has upheld the rules in previous cases when David Beckham, Thierry Henry and Landon Donovan had to wait until January to make loan moves to Europe after the Major League Soccer season ended.

Drogba signed a contract through 2014 with Shanghai weeks after helping Chelsea win the Champions League title in May. He scored an 88th-minute equalizer against Bayern Munich, then struck the winning penalty in the shootout.

Drogba is an iconic figure in Chelsea history and was back at Stamford Bridge on November 11 to see his old team draw 1-1 with Liverpool.

Chelsea appeared to be missing his powerful presence Tuesday in a 3-0 loss to Juventus in the Champions League, which led to manager Roberto Di Matteo being sacked early Wednesday.

Even if FIFA relented and Chelsea was allowed to sign Drogba on a short-term contract, he could not play in its must-win final group match against Nordsjaelland on December 5.

Champions League teams must register their squad lists for the group stage with UEFA in September before their first match.

Speaking earlier this month, Drogba indicated that he would be keen to return to Chelsea to train ahead of the tournament, but not play.

He said: ‘If everyone agrees, it is possible I will go and train there until the African Cup starts. But that is all it will be.’

But that could change now that Chelsea will look to do all they can to haul themselves back into the title race.

Drogba joined Chelsea in 2004 from Marseille, where he was also hugely popular despite playing for only one season, helping it reach the UEFA Cup final.

He has often said he wants to return to Marseille one day, but club president Vincent Labrune thinks his wages would be too high for cash-strapped Marseille, which sold key players like midfielder Alou Diarra and utility player Stephane M’Bia to raise funds.

‘Obviously I’m in favor of all great players who are capable of making financial sacrifices,’ Labrune said Tuesday on RMC radio. ‘If Lionel Messi wants to come, I’m in favor. But we’re talking for nothing.’

Liverpool are also in desperate need of a striker and if FIFA grant permission for the move to go ahead then Brendan Rodgers could be tempted to make a move for the striker.

The Ivorian is not the only former striker who could return to the Premier League on a short-term deal. Arsenal manager Arsene Wenger refused to rule out a second loan move for New York Red Bulls striker Henry.

Wenger said he would make a decision in January but admitted it was a tempting prospect given Henry’s qualities and the fact Arsenal will be ‘short’ of strikers in the new year owing to the Africa Cup of Nations.

The Arsenal manager said: ‘You know what Thierry gives you: he gives you hope, especially when he comes on (as a substitute). That is the most important thing.

‘He is a communicator, an extrovert and very intelligent. I had always resisted (bringing him back). Last year I did it because we lost Gervinho.

‘This year we lose Gervinho again as they are playing the Africa Cup of Nations two years in a row. So we will be confronted with a shortage – particularly if (Marouane) Chamakh should go. Then we will be short.’ (Source)