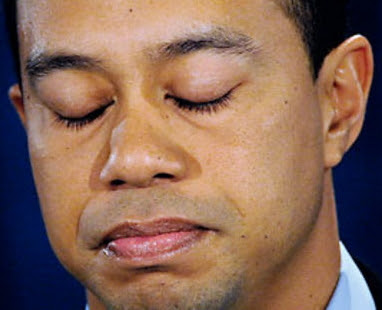 Golf legend Tiger Woods has admitted for the first time his career may be over.

The popular golfer who noted he was uncertain about his return to competitive golf spoke on Wednesday with golf media for the first since his May arrest in Florida for driving under the influence, which led to some time in a rehab center to address his use of prescription drugs.

The golf star player hasn’t played competitive golf since January of this year when he missed the cut in the Farmers Insurance Open. Since that time he has had another back surgery (his fourth) been arrested for driving under the influence, and has barely swung a club.

Woods has recovered enough to be an assistant captain on the Presidents Cup team and has been hitting 60-yard shots, but he is uncertain whether or not he will return to the sport he once dominated and said as much on Wednesday ahead of the Presidents Cup.

“I don’t know what my future holds, We’re taking one step at a time, it’s a process and I’m in no hurry. My timetable is basically what my surgeon says. I’m hitting 60 yard shots, very straight right now.”

Woods will turn 42 at the end of this year and a return to the sport seems like it is slowly slipping away. While there are 40-year-old guys on Tour who are still playing at competitive levels, none of them have undergone as many surgeries on such a difficult part of the body to heal after injury as Woods has with his back.

Continue Reading
You may also like...
Related Topics:future, tiger woods