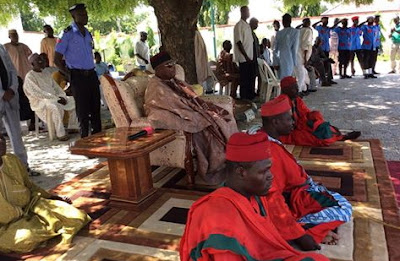 The officers, according to a report by PREMIUM TIMES were killed in the night while trying to make arrests at Dowaya, a predominantly Fulani settlement.

Following the killing many residents have started fleeing the area.

Police spokesperson, Othman Abubakar, a superintendent of police, said he had heard there was problem in Numan but could not immediately give details.

Mr. Abubakar said he was at a “crucial meeting” with the state Commissioner of Information and other relevant officials.

The North-East Chairman of Miyetti Allah, Mafindi Umaru Danburam, also told PREMIUM TIMES he had received report that there was problem in Numan “when some people in uniform attacked those that were taking refuge at Dowaya”.

He said two people were shot and that he was trying to get further details.

Dozens of mainly Fulani residents, including and children, were killed in Numan over a week ago by a local militia.

One source said police had been tipped off about a gathering of Fulani residents, and were trying to storm the area.

Another source said those at the gathering were merely “mourning” their slain wives and children when police stormed the area. The “mourners” had relocated from Shafaran, Shawal, Gumara, Kikam and Kadamt, he said.

“Some residents in the area were not comfortable, so they tipped-off and mobile police launched a night operation to arrest the Fulanis and a fight ensued during which at least six mobile police were said to have been killed.

“As I am talking to you more security operatives were deployed to Dowaya area including soldiers and they have cordoned-off the village.

‘’There is pandemonium right now in Numan and environs; already residents are fleeing for fear of reprisals,’’ said a vigilante member who asked not to be named.

Modibbo Ahmadu, a Fulani fleeing the area, told PREMIUM TIMES by phone ‘’You know some of our brothers who were displaced are now taking refuge at Dowaya village , where they do observe the usual 40 days mourning for those killed by Bachama militias.

‘’Just last night we got distress call that some people in security uniform stormed on them and had shot two youths, so definitely in this kind of situation anything could happen.

‘’And that’s the situation for now, even we at the neighbouring villages are not safe, and many had fled,’’ he said.